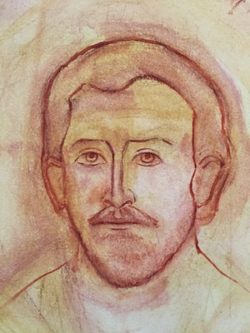 Missionary to America and Hieromartyr under the Bosheviks

Alexander Hotovitzky was a gifted administrator mentored by St. Tikhon, Patriarch of Moscow.

Born in Russia in 1872, St. Alexander came to America and served as reader at St. Nicholas Orthodox Church in New York City. Following his marriage, he was ordained to the diaconate and then the priesthood in 1896 and then became pastor of the New York City parish under the leadership of Bishop (later Patriarch of Moscow) Tikhon.

He worked to provide a spiritual home to immigrants from Eastern Europe. He also spearheaded the building of the new St. Nicholas Cathedral in New York, replacing the humble parish church where he served. He solicited funds from Orthodox communities throughout the United States and even traveled to Russia to raise funds.

In 1914, he was called back to Europe and served until 1917 in Helsinki, Finland, and then to be assistant pastor of Christ the Savior Cathedral in Moscow, again under the leadership of St. Tikhon. He participated in the Church Council of 1917-18, which came to an abrupt end with the beginning of the Russian Revolution.

In 1922 he was sentenced to 10 years in prison and the confiscation of his property, but was freed the next year and served at various churches in Moscow. In 1924, he was exiled to the far north for three years. Arrested again in 1937, he disappears from the documentary records, but most reports from the time say that he died as a martyr.