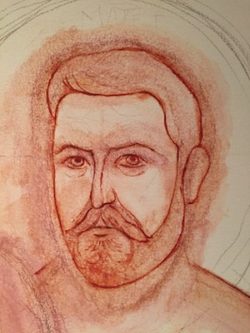 St. Matej Stiyachich was born in 1883 in Herzegovina, part of what later became Yugoslavia.

He was a married priest with several children serving in Chisholm, Minnesota, at the end of the 1920s. He served in other U.S. Parishes during the 1930s, before and after living on the Iron Range.

In 1935, he returned to Croatia, to the village of Smiljan, where the father of Nikola Tesla, Father Milutin Tesla, was parish priest from the 1850s until his death. In the United States, St. Matej was friends with Nikola Tesla.

Nazis arrested St. Matej in 1941 and sent him to the Ustashe-run prison at Gospich, where he, along with some 2,000 Serbs, many Orthodox clergy, were tortured daily. Witnesses reported that after the beatings, St. Matej was barely able to move.

He was later taken to the Jadovno concentration camp in the Velebit Mountains, where he was among tens of thousands thrown into deep pits and allowed to die.

The Communist government of Yugoslavia refused to allow excavation of the camp and even filled some of the pits with concrete. Only after the fall of Communist Yugoslavia in 1991 were excavations permitted.

St. Matej was glorified by the Orthodox Church in 2004.