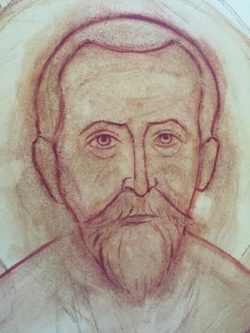 St. Vasily Martysz lived in North America from 1900 to 1912, serving in locations from the wilds of Alaska to the west-central provinces of Canada to the eastern United States. He returned home to Europe, where he survived the Russian Revolution and World Wars I and II, and organized and led the Orthodox chaplains in the Polish Army.

He was born in 1874 in Tertyn, Poland, and at age 10 traveled with his father to New York. When Bishop Vladimir told the boy he should be a missionary priest to America, he took it to heart and became a priest.

In 1899, Father Vasily moved to America to work as a missionary. He worked out of Afognak, Alaska, and traveled long distances by kayak.

The family from Alaska in 1906 and worked in the eastern United States, as well as Alberta and Manitoba, Canada.

They returned to Europe in 1912. When the first world war broke out, the government ordered clergy to move to Russia for their safety. When the war ended in 1919, Russia allowed Polish refugees to return home. He organized an Orthodox chaplaincy for the Polish Army and served as the leader of Orthodox chaplains for 25 years.

During that time, he also worked to gain autocephaly for the Polish Orthodox Church, which it received in 1925.

After his retirement in 1936, Father Vasily retired to his childhood home, where he lived with his daughter’s family. In 1945, thugs broke into his home, beat his daughter, and tortured, then shot and killed Father Vasily. The Autocephalous Orthodox Church of Poland glorified him as a New Martyr in 2003.