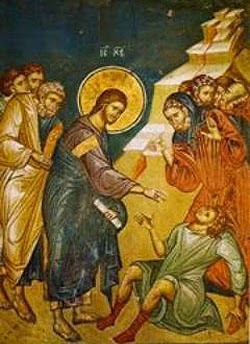 Yesterday we celebrated the Feast of the Dormition of the Mother of God, the greatest saint of our Church! In her we have such a great example of faith and love. And we can see how the Lord rewards those who love Him and live their lives with such great faith.

Today we are given an example of a great contrast! (Matthew 17:14-23) Throughout the Gospels, Jesus tells us how important faith is. We are familiar with those verses which say, “Your faith has made you well”, or, “May it be done according to your faith”.

In Ephesians 6 we are told “above all, taking the shield of faith with which you will be able to quench all the fiery darts of the wicked one.”

We are constantly reminded, faith is so important and necessary. In today’s Gospel reading we are told of a man who had a son, afflicted by a demon, which caused seizures, and frequently through him into the fire or into water. What a stark contrast, from yesterday to today. The Mother of God, raised from a little girl in the temple, dedicated to God. Given the most wonderful gift of bearing the creator of the universe! And going on to become as I mentioned, the greatest saint of our Church! And today, we hear of this poor man, so stricken with grief, so burdened with life’s cares, and having to witness his own son so completely wracked and enslaved by evil.

We don’t know from this Gospel reading how this man’s son came to be in the grip of the demon. But we can see the malevolence towards the child. We know from scripture that demons do not have free rein, they can’t just do whatever they want. Remember how the demons begged the Lord to let them go out of the man and enter into a herd of swine? (Mark 5) Their actions are limited by God, otherwise they would have destroyed the child in today’s Gospel.

The boy’s father was at his wit’s end. He didn’t know what to do. He brought his son to the disciples, to see what they could do for him. But we see in the Lord’s reaction, that he approached without faith, perhaps even in hopelessness, thinking there was nothing anyone could do.

“So I brought him to Your disciples, but they could not cure him.” You see he went without hope. And the Lord saw this, and in His disappointment said, “O faithless and perverse generation, how long shall I be with you? How long shall I bear with you? Bring him here to Me.” Faith is the key ingredient here that the Lord is pointing to. In this instance, He didn’t chastise the man for his sins, He didn’t say, “This wouldn’t have happened if you hadn’t done such-and-such”. But He did chastise him for his lack of faith! Certainly if the man had had faith, he and his son would probably not be in this situation to begin with. But so that again, we may see the power of God and  learn from this, this very difficult situation was allowed to befall them.

In the very presence of the God-man, this demon came right out. It had to, as the scripture says, “And Jesus rebuked the demon, and it came out of him; and the child was cured from that very hour.” And we don’t know from this scripture reading what happened after this with the boy and his father. But I think they began to understand what it means to bear the “shield of faith”. But the disciples were understandably bothered by the situation. They asked the Lord, “Why could we not cast it out?” We see that the disciples too, lacked faith. The Lord’s answer to their question was simple; “Because of your unbelief”.

Were they scared? Did they shrink back when they saw how the boy was so violently treated by this wicked demon? In any case, the Lord said, “because of your unbelief”. Which leads us to believe, had they had faith, they could have freed the boy. But notice how the Lord tells them this in private, not publicly. And the Lord goes on to teach them. With faith, you only need a little bit. Not a lot! In fact He uses the image of a mustard seed right? “for assuredly, I say to you, if you have faith as a mustard seed, you will say to this mountain, ‘Move from here to there,’ and it will move; and nothing will be impossible for you.”

Now we certainly don’t think He’s telling us to try to move mountains. But He’s telling His disciples, and teaching them, that with just a little faith, if you ask for something to the benefit of your soul, or for another’s benefit, the very laws of nature can be bent! How many times have we heard of some wonderful events which have happened in the life of the Church? Again, take the Mother of God as an example!

We are also instructed as to the importance of our own preparation for the spiritual life. How many times in scripture do we see the Lord go off alone to pray? And fast? Here in the scripture it is just a natural component, going hand in hand with faith. The Lord Himself tells His disciples; “However, this kind does not go out except by prayer and fasting.” The two hands holding up that shield of faith, prayer, and fasting. If we take that shield for ourselves, and hold it up, it will indeed “quench the fiery darts of the wicked one”.

Let us not shrink back in times of difficulty. Take hold of that shield. So many of the battles we go through, depend on us, simply lifting that shield of faith. Do we get tired? Yes. But we know, that God is with us! That shield of faith does not have to be big and heavy, but small and light as a mustard seed! Remember, the Lord said, “Be of good cheer! I have overcome the world!”.

Previous Post: « Homily for Dormition
Next Post: Encyclical of His Beatitude Metropolitan Tikhon for the Beginning of the Ecclesiastical New Year 2020 »