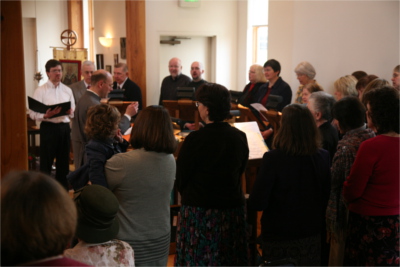 We’re surrounded by music. It’s everywhere. Most of our radio stations exist to play music. Our parks feature summertime free concerts most nights of the week somewhere in town. Our electronic devices and computers have grown in memory capacity in large part to contain the music we put on them. We exercise with music. Many people have it playing in the background throughout the day. Music forms the backdrop of our consumer experiences, whether in ads or in stores. Sometimes, we even go to hear live music performed.

This is hardly new to human experience. Human society is marked by music-making of all kinds: singing and playing alone and in groups, in play and in work, in ritual and in worship. We rejoice with music and we lament with music. We dance to music and we rock a baby with a song. We drum, we strum, we pluck, we hum.

It’s not surprising, then, that folks are curious and often opinionated about the role and form that music takes in the common life of the Church. I could say, “This is especially true in the Orthodox Church,” but that would be silly. I know of no church where music isn’t important, and I can’t say that it’s more important in Orthodoxy.

I can say that, in Orthodox Christian worship, singing – and thus music – is fundamental in a way that is less so of most other churches. The services of prayer and praise held here at St. Nicholas Church are not merely punctuated with singing. The singing starts and doesn’t really end until we finish. Oh, we pause between sections, of course; the service isn’t one continuous song. Although at times you may be hard-pressed to tell when one section ends and another begins. Some elements are taken in a speaking voice, most notably the sermon. Sometimes a reader will read in a normal speaking voice.

To illustrate, we often use the phrase “sing vespers” or “sing matins” or “sing the liturgy.” We don’t stop the flow of the service to “sing a hymn.” We sing virtually the whole thing: dialogues as well hymns. And herein lies the difference from what most people are probably used to.

The nature of Orthodox worship is liturgical, which means that it mostly is objective to us. We aren’t performing a program or presenting a message. We aren’t illustrating a theme utilizing a song here, a reading there, a drama here or a visual presentation there. We are engaging in a long-standing dialogue with each other, the Scriptures, the prayers and the hymns – a dialogue which, much like most of our interpersonal conversation, is made up of stock phrases: “Hello. How are you?”“Fine, and you?” and so forth. These stock phrases carry in them Orthodox Christian meaning about God, ourselves, the world, salvation:

“And to your spirit.”

“Let us bow our heads to the Lord.”

Much of the dialogue, like the above example, is at the very least good manners. It’s good manners to greet people. It’s respectful to reply. But in these mannerly, formal phrases rest truths we affirm again and again. While we can’t unpack these meanings here, these liturgical phrases are integral to passing the Faith along.

“Holy things are for the holy.”

“One in holy. One is Lord: Jesus Christ, to the glory of God the Father. Amen.”

These phrases take the form, often, of call-and-response, a phrase familiar to those who have had experience with folk singing. The “responses” are taken by the gathered Faithful and are very important to the service. St. Paul asks, “How can anyone say ‘Amen’ to your thanksgiving if no one can understand it?” This “Amen” is the very least bit needed for Christian worship. A declaration is made, and prayer is offered, but for it to be of the community, it must be received and agreed upon. This is the function of “Amen.”

Singing the “Amen” carries two important functions: First, it helps everybody to stay together. This togetherness in music is called “rhythm,” and is inevitable in speech. If you’ve ever heard recordings or participated in protest calls (“What do we want?” “Justice!” “When do we want it?” “Now!”) or advertising calls (“Get your fish here! Fresh fish for sale!”) you know how quickly a rhythm develops, and even a simple tune, usually consisting of just a couple notes or pitches.

This slipping into rhythm and melody also occurs when people are projecting their voice into larger spaces and for larger groups. It’s easier to project the voice when it rides upon the breath and with a more sustained tone. Voila! Singing. In the large cathedrals of fourth-century Christendom, it’s probable that priests and deacons simply “slipped” into chanting when calling to the large congregation. And in reply, the congregation simply imitated them and does what a crowd does: found a single voice.

The second important function of singing is that it adds a tone of solemnity. While this kind of solemnity has somewhat fallen out of popular usage in modern liberal democratic society, with its egalitarian mood and informal style, nonetheless, it is not wholly absent. An American president speaking at his inauguration uses a more formal style of vocal tone than he does in a campaign speech. This more presentational style of speaking not only helps him to project his voice, as we stated above, but also can add a tone of gravity and solemnity, befitting the occasion. This tone changes on the campaign trail, but it is still not the tone he uses in private.

It is this sense of solemnity, of objectivity, of occasion that Orthodox Christians find quite natural and appropriate in worship, for in worship timeless truths of the Faith are being proclaimed and the God of the universe is being addressed. It is in maintaining this sense of dignity – reverence is the word we prefer – that causes the gospel of God’s love and grace to gain its true context and meaning. We approach God as creatures, but He calls us children. We approach God as Father, and He calls us friends. We approach God as sinners, yet He offers us grace to be saints. In order to receive His gifts, we must come with open hand. For the Orthodox, it is reverence which opens the hand (and heart).

What has this to do with music? We approach God “with singing.” We use the singing voice to help form our attitude, which, let’s be frank, is quite fickle! To sing “amen” or “Lord, have mercy” when in a distracted mood is to take a step towards that mood’s healing. The act of singing is healthy: it requires breath and an even flow of that breath. And its vibrations spread through the body allowing it to become an – the – instrument of that prayer and praise. And the voice goes out and joins melodiously (hopefully!) with other voices, and becomes one. This is neither romantic nor sentimental. It is true.

This also explains why we use only the voice and no mechanical instruments of music. It’s not unlike the current preference among many for organic foods. There’s something pure about the unaccompanied voice. It’s simpler. It’s more honest. We can’t hide behind a loud organ or a beautiful violin or a rhythmic piano. We come with what and who we are. And it is that gift which, like the bread and wine of the Communion, is taken by God, filled with His Spirit and returned for our salvation and His service.