You are here: Home / Sermons / “Rejoice, and be extremely glad, for great is your reward in heaven!”

Quite often in the scriptures you get a little glimpse, or a hint of the Love of God for mankind, manifested in a supernatural way. In ways that go beyond the normal everyday stuff of life that we’re all familiar with. These little glimpses can sneak past you too, if you’re not paying attention. For example, look at our epistle reading today. It was taken from Galatians 1:11-19.

In spite of this hateful conduct of the future apostle, the Lord still called him out to be one of His servants! And from that moment, St. Paul never looked back!  But what did he do at first? Did he join the other apostles right away? No! Look at what he says in the epistle: “I did not immediately confer with flesh and blood,

nor did I go up to Jerusalem to those who were apostles before me; but I went to Arabia, and returned again to Damascus.

Then after three years I went up to Jerusalem to see Peter, and remained with him fifteen days.”

It’s interesting to me that St. Paul didn’t go to spend time with the other Apostles at that time. They likely wouldn’t have accepted him anyway. But he went into the desert. There was no school out there. But he indicates who he met in his writing;

“For I neither received it from man, nor was I taught it, but it came through the revelation of Jesus Christ…But when it pleased God,…to reveal His Son in me, that I might preach Him among the Gentiles,”.

Taught by revelation! Divine revelation! You can only imagine what St. Paul experienced for three years off in the desert, and in Damascus. Three years. That is the length of time of Christ’s earthly ministry. St. Paul must have spent much of his time with Christ, although not in precisely the same way as the other Apostles. I’m reminded of the words of St. Paul in another one of his epistles, his second Letter to the Corinthians; “Without a doubt, it is not profitable for me to boast, but I will now discuss visions and revelations from the Lord. 2 I know a man in Christ who fourteen years ago was caught up into the third heaven (whether [it was] in the body, I do not know, or whether out of the body, I do not know; God knows). 3 [Yes], I know such a man (whether in the body, or outside of the body, I do not know; God knows), 4 how he was caught up into Paradise, and heard ineffable words, which it is not lawful for anyone to utter.” (2 Cor 12:1–4).

Was this the period of time when St. Paul had gone off to Arabia, and then to Damascus? I don’t know, but it is obvious that St. Paul received some special “supplementary” instruction from the Lord, to make up for his not spending any time with Jesus in person like the other disciples.

And, having been given these revelations of God, receiving the Gospel from the Lord Himself through Divine Revelation, St. Paul managed to stay humble. According to his writing he also received Divine help with this also; “7 Because of the tremendous greatness of these revelations, a thorn in the flesh was given to me, a messenger of Satan that torments me, so that I would not be too exalted.” (2 Co 12:7).

The Apostle Paul, in maintaining that humble, poor spirit you might say, obtained great riches in heaven! I can see in St. Paul, in a way, an example of the parable we heard today, of the rich man, and Lazarus. Listen to what St. Paul says again of himself; “Therefore, I take pleasure in weaknesses, in injuries, in necessities, in persecutions, in distresses, {all this} for Christ’s sake. For when I am weak, then I am strong! 11 I have acted foolishly in this boasting, but you compelled me! I should have been commended by you, because even though I am nothing, I am not in anything inferior to the very best apostles. 12 Truly, the signs of an apostle were worked among you in all patience, in signs, wonders, and mighty deeds.” (2 Co 12:10–12).

Now, St. Paul has gone from being a “successful” rabbi, someone of much worldly importance in the culture there, to being a poor pauper. Shunned and rejected by the Jewish authorities, who resemble the rich man in today’s parsable. Now St. Paul, and everyone who follows in Christ’s footsteps to the degree St. Paul did, resemble poor Lazarus. Ignored by the world, even persecuted by it. Indeed, St. Paul would eventually give his life because of the message of the Gospel! Remember, the words of Christ, in the Beatitudes, which we heard this morning:

“Blessed are the poor in spirit,

for theirs is the Kingdom of Heaven!

4 Blessed are those who mourn,

for they shall be comforted!

5 Blessed are the meek,

for they shall inherit the earth!

6 Blessed are those who hunger and thirst after righteousness,

for they shall be filled!

7 Blessed are the merciful,

for they shall obtain mercy!

8 Blessed are the pure in heart,

for they shall see God!

9 Blessed are the peacemakers,

for they shall be called children of God!

10 Blessed are those who are persecuted for righteousness’ sake,

for theirs is the Kingdom of Heaven!

11 Blessed are you when people revile you, persecute you,

and say all kinds of evil against you falsely for my sake! 12 Rejoice, and be extremely glad,

For St. Paul, as he himself wrote elsewhere, “To live is Christ, to die is gain”! He didn’t say this out of depression, and a suicidal outlook! But he has a taste of heaven. He saw Paradise! He knew in some way, the reward and the beauty that awaits faithful believers. He willingly suffered like Lazarus, because he knew what the Lord had promised those who love Him! He knew what the end result would be of living a godly life, dedicated to God, not the acquisition of worldly wealth would be. Only Christ, could promise the meek “shall inherit the earth”! Only Christ could say, those who hunger and thirst after righteousness “shall be filled”. More than that, only Christ could say “Blessed are the pure in heart, for they shall see God!”, etc. And especially, only Christ could promise a heavenly reward! And St. Paul knew of this, he again, had seen this with his own eyes already!

Let us heed the words of Christ, and His Apostles. They are words of life, eternal life! Christ Himself urges us on, and upward to the Kingdom of Heaven! Let us with gratitude for God, for the adoption He has given us as His sons and daughters, “Rejoice, and be extremely glad, for great is your reward in heaven!” 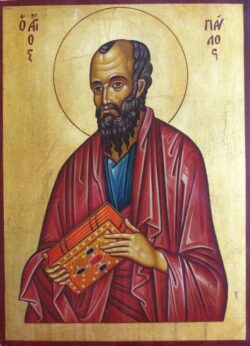 Previous Post: « Lord, even the demons are subject to us in your Name!
Next Post: The Gadarene Demoniac »