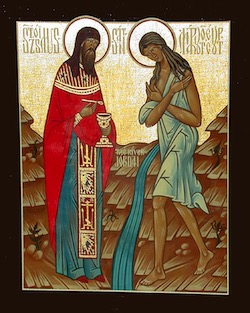 When the stone had been sealed by the Jews, while the soldiers were guarding Your most pure body, You rose on the third day, O Savior, granting life to the world. The powers of heaven therefore cried to You, O Giver of Life: “Glory to Your Resurrection, O Christ! Glory to Your Kingdom!// Glory to Your dispensation, O Lover of mankind!”

The truth of your deeds has revealed you to your flock as a rule of faith, an image of meekness and a teacher of self-control; your humility exalted you; your poverty enriched you.// O Father Bishop Nicholas, pray to Christ God that our souls may be saved.

The image of God was truly preserved in you, O Mother, for you took up the Cross and followed Christ. By so doing, you taught us to disregard the flesh for it passes away; but to care instead for the soul, for it is immortal.// Therefore your spirit, O holy Mother Mary, rejoices with the angels.

As God, You rose from the tomb in glory, raising the world with Yourself. Human nature praises You as God, for death has vanished. Adam exults, O Master! Eve rejoices, for she is freed from bondage and cries to You:// “You are the Giver of Resurrection to all, O Christ!”

You proved yourself to be be a holy priest, O Nicholas. You served God in Myra and lived the gospel of Christ. You offered your life for your people, And rescued the innocent from death. Therefore God has glorified you as a trustworthy guide of things divine.

Having been a sinful woman, you became through repentance a bride of Christ.
Having attained angelic life, you defeated demons with the weapon of the Cross.//
Therefore, O most glorious Mary, you are a bride of the Kingdom.

Steadfast Protectress of Christians, Constant Advocate before the Creator;
Do not despise the cries of us sinners, but in your goodness
come speedily to help us who call on you in faith. Hasten to hear our
petition and to intercede for us, O Theotokos, for you always protect those who honor you!

But Christ came as High Priest of the good things to come, with the greater and more perfect tabernacle not made with hands, that is, not of this creation. Not with the blood of goats and calves, but with His own blood He entered the Most Holy Place once for all, having obtained eternal redemption. For if the blood of bulls and goats and the ashes of a heifer, sprinkling the unclean, sanctifies for the purifying of the flesh, how much more shall the blood of Christ, who through the eternal Spirit offered Himself without spot to God, cleanse your conscience from dead works to serve the living God?

But before faith came, we were kept under guard by the law, kept for the faith which would afterward be revealed. Therefore the law was our tutor to bring us to Christ, that we might be justified by faith. But after faith has come, we are no longer under a tutor. For you are all sons of God through faith in Christ Jesus. For as many of you as were baptized into Christ have put on Christ. There is neither Jew nor Greek, there is neither slave nor free, there is neither male nor female; for you are all one in Christ Jesus. And if you are Christ’s, then you are Abraham’s seed, and heirs according to the promise.

V. God gives vengeance unto me, and subdues people under me. (Ps. 17:48)
V. He magnifies the salvation of the King and deals mercifully with David, His anointed, and his seed forever. (Ps. 17:51)

V. I waited patiently for the Lord; He attended to me and heard my supplication. (Ps. 39:1)

Now they were on the road, going up to Jerusalem, and Jesus was going before them; and they were amazed. And as they followed they were afraid. Then He took the twelve aside again and began to tell them the things that would happen to Him: “Behold, we are going up to Jerusalem, and the Son of Man will be betrayed to the chief priests and to the scribes; and they will condemn Him to death and deliver Him to the Gentiles; and they will mock Him, and scourge Him, and spit on Him, and kill Him. And the third day He will rise again.” Then James and John, the sons of Zebedee, came to Him, saying, “Teacher, we want You to do for us whatever we ask.” And He said to them, “What do you want Me to do for you?”

They said to Him, “Grant us that we may sit, one on Your right hand and the other on Your left, in Your glory.” But Jesus said to them, “You do not know what you ask. Are you able to drink the cup that I drink, and be baptized with the baptism that I am baptized with?” They said to Him, “We are able.” So Jesus said to them, “You will indeed drink the cup that I drink, and with the baptism I am baptized with you will be baptized; but to sit on My right hand and on My left is not Mine to give, but it is for those for whom it is prepared.” And when the ten heard it, they began to be greatly displeased with James and John.

But Jesus called them to Himself and said to them, “You know that those who are considered rulers over the Gentiles lord it over them, and their great ones exercise authority over them. Yet it shall not be so among you; but whoever desires to become great among you shall be your servant. And whoever of you desires to be first shall be slave of all. For even the Son of Man did not come to be served, but to serve, and to give His life a ransom for many.”

Then one of the Pharisees asked Him to eat with him. And He went to the Pharisee’s house, and sat down to eat. And behold, a woman in the city who was a sinner, when she knew that Jesus sat at the table in the Pharisee’s house, brought an alabaster flask of fragrant oil, and stood at His feet behind Him weeping; and she began to wash His feet with her tears, and wiped them with the hair of her head; and she kissed His feet and anointed them with the fragrant oil. Now when the Pharisee who had invited Him saw this, he spoke to himself, saying, “This Man, if He were a prophet, would know who and what manner of woman this is who is touching Him, for she is a sinner.” And Jesus answered and said to him, “Simon, I have something to say to you.” So he said, “Teacher, say it.” “There was a certain creditor who had two debtors. One owed five hundred denarii, and the other fifty. And when they had nothing with which to repay, he freely forgave them both. Tell Me, therefore, which of them will love him more?” Simon answered and said, “I suppose the one whom he forgave more.” And He said to him, “You have rightly judged.” Then He turned to the woman and said to Simon, “Do you see this woman? I entered your house; you gave Me no water for My feet, but she has washed My feet with her tears and wiped them with the hair of her head. You gave Me no kiss, but this woman has not ceased to kiss My feet since the time I came in.

You did not anoint My head with oil, but this woman has anointed My feet with fragrant oil. Therefore I say to you, her sins, which are many, are forgiven, for she loved much. But to whom little is forgiven, the same loves little.” Then He said to her, “Your sins are forgiven.” And those who sat at the table with Him began to say to themselves, “Who is this who even forgives sins?” Then He said to the woman, “Your faith has saved you. Go in peace.”

We have mentioned how the entire church building is centered around the altar table. The altar table does not merely symbolize the table of the last supper. It is the symbolic and mystical presence of the heavenly throne and table of the Kingdom of God; the table of Christ the Word, the Lamb and the King of the ever-lasting life of God’s glorified dominion over all of creation.

The Book of the Gospels is perpetually enthroned on the altar table. It is on the altar table that we offer the “bloodless sacrifice” of Christ to the Father. And from the altar table we receive the Bread of Life, the Body and Blood of the Lord’s Passover Supper. This table is the “table of God’s Kingdom” (Lk 13.29). In Orthodox Tradition the altar table is often carved wood or stone. It is usually vested with colorful material to show its divine and heavenly character. It should always be a simple table of proportional dimensions, often a perfect cube, and is always free-standing so that it may be encircled. On the altar table one always finds the antimension. This is the cloth depicting Christ in the tomb which contains the signature of the bishop and is the permission for the local community to gather as the Church. “Antimension” means literally “instead of the table.” Since the bishop is the proper pastor of the Church, the antimension is used instead of the bishop’s own table which is, obviously, in his own church building, the cathedral—the place where the bishop has his chair (cathedra). The antimension usually contains a relic (normally a part of the body) of a saint which shows that the Church is built on the blood of the martyrs and the lives of God’s holy people. This custom comes from the early Church practice of gathering and celebrating the eucharist on the graves of those who have lived and died for the Christian faith. Usually, a relic of a saint is embedded in the altar table itself as well. Also on the altar table there is a tabernacle, often in the shape of a church building, which is a repository for the gifts of holy communion that are reserved for the sick and the dying. Behind the altar table there is usually a seven-branched candle stand which comes from the Old Testamental tradition of the Jewish temple. Generally speaking, the Jerusalem temple is highly valued in the Orthodox Christian tradition of worship and church construction as a “prototype” of the true worship “in spirit and truth” of the Kingdom of God (Jn 4.23).

The holy fathers submitted to whatever God sent them like little children, in total simplicity. ‘If this is what you want, your will be done’. Sorrow’s pleasing to God so long as it doesn’t deprive us of the courage to strive.

God’s love is immeasurable and embraces everything. What’s different about this love is its inner quality: God can be glad and can pay the price of his love on the cross.