You are here: Home / Sermons / The Gadarene Demoniac

We love to hear stories of heroes. I know in my house my kids have seen all the Marvel superhero movies. Thor, Ironman, and who doesn’t like Captain America! We love stories about really good, benevolent people coming to the rescue of others who are in peril. Even in today’s news, we have a story of a dramatic hostage rescue. These stories also have something else in common. The bad guy! In old western movies, the bad guy always wore the black hat, the good guys always wore the white hat. There seems to be something within all of us that really relates to these stories. I think in a lot of ways these are stories of us, the story of humanity.

In today’s gospel we hear of another hero. We don’t often think of Him as a hero though. Jesus? But He is, and He was on a mission, truly, to save mankind. Who’s the bad guy? Is it the Pharisee, or the Sadducee? The Roman Emperor? No, Satan, and his minions, his demons.

Today’s gospel reading gives us a really graphic look at our predicament. Us, as in mankind. What we read today in the gospel, comes not long after another amazing occurrence. It was a day perhaps like any other. The sun was probably shining, nice weather. It was a good day to go sailing on the Sea of Galilee!

In Luke 8:22-25, we read about Jesus getting into a boat with His disciples. He urges them, “Let us cross over to the other side of the lake.” This of course is not a quick trip. Jesus takes a nap somewhere on the boat. As He is sleeping a windstorm picks up on the water and the conditions become very rough. The boat begins to take on water, and the disciples become concerned and begin to panic. In vs. 24 it says “they came to Him and awoke Him saying, ‘Master, Master, we are perishing!’ Then He arose and rebuked the wind and the raging of the water. And suddenly the wind ceased, and there was a calm. But He said to them, ‘Where is your faith?’”

And the disciples were amazed at this. They said to one another in vs. 25 “Who can this be? For He commands even the winds and water, and they obey Him!” The disciples were still really trying to get a grip on who Jesus was. He had control over the natural elements? Who is this? As you think about this, remember the question Jesus frequently asked his disciples. “Who do say that I am?” This is very important. This is the Gospel. Who do we say that Jesus is? The disciples hadn’t figured it out at this point. “Who can this be?” they said.

This trip over the lake was another opportunity for the Lord to demonstrate for His disciples just Who He is. It was Christ who said to His disciples, “Let us cross over to the other side of the lake”. He knew just where He wanted to go, and why, and what would happen on the way. St. Gregory Palamas says “It is clear from this that with foresight and mercy He came of His own accord to help the man who had been so terribly harassed by demons for so long.” (The Homilies: Homily 50, pg. 394). Now just after demonstrating His authority over the natural elements, He would demonstrate His authority over the hateful demons that roam this earth.

Jesus did not have to go looking for the man when He got to the shore. The gospel says “There met Him a certain man from the city who had demons for a long time. And he wore no clothes, nor did he live in a house but in the tombs. When he saw Jesus, he cried out, fell down before Him, and with a loud voice said, ‘What have I to do with you, Jesus, Son of the Most High God? I beg you, do not torment me!’” (vs’s 27, 28) Again, in St. Gregory Palamas’s homily on this subject it says: “The Lord makes a special point of expelling demons from those possessed, so that we might be aware that He is the one who can drive them out of our souls and grant us eternal freedom.” (Ibid)

Elsewhere in his homily, St. Gregory explains to us why this poor man might have been given over to demon possession, why in general would the Lord permit this kind of thing. “As most people are unable to comprehend the devil’s maniacal fury against us from his attacks on our souls and the assistance he lends us when we sin, God permitted that there should be some people physically under the control of demons, that we might all learn from them how terrible is the affliction of a soul which intends to make itself the devil’s dwelling through evil deeds.” You see here St. Gregory points to the cause. It is not God causing this, but it is evidently the result of evil deeds on the part of the person in question. St. Gregory continues, “When, on account of the incomparable vastness of His love for mankind, the only-begotten Son fo God bowed the heavens and came down to earth (Ps.144:5).

And as if to help the disciples answer the question of “Who can this be?”, in vs. 28 the demon possessed man is compelled by the presence of Jesus in front of him to say it out loud: “When he saw Jesus he cried out, fell down before Him, and with a loud voice said, ‘What have I do to with you, Jesus,  Son of the Most High God? I beg You, do not torment me!’” This hateful band of demons, involuntarily had to fall down before Jesus! They confessed who He was! The reminds us of the verse in Romans 14:11, which is a quote of a verse in Isaiah: “As it is written:‘As I live,’ says the Lord, ‘every knee will bow to me; Every tongue will confess to God.’”  (Ro 14:11). We can see this is fulfilled even with the wicked demons. Even the demons were compelled to cooperate with God, and in this situation helped to convince the disciples of Who Jesus is!

It’s not as if the mere presence of Christ persuaded the demons to repentance, no! They simply have no answer to Christ. They can do absolutely nothing without His permission. They are unable and unwilling to repent. They want to destroy, out of their hateful jealousy towards God. We can see how evil, and malevolent they are by what happened as soon as they were permitted by Jesus to enter the herd of swine. They could go nowhere without His permission, so they begged Jesus to enter this herd of swine, a legion of demons, potentially thousands of them!

When they entered the swine, they immediately showed what they would also do to mankind if they were permitted by causing them to run off of a cliff into the lake to drown. Destruction and death is what they bring. Our Lord, brings liberation, healing, life!

This in a small way shows us what all of mankind is under the influence of. We see clearly who our real enemy is. And it shows how clearly impotent this adversary is. This is the mission of Christ, the rescue mission. Ever since the fall of Adam and Eve, mankind has been on a downward spiral to enslavement to sin and its consequence, death. And this is what Jesus our Lord has come to free us from. He has come to mankind, as He came to the shore of the Lake to free the demon possessed man. He offers us freedom from the illness of sin, He offers us resurrection! He even offers to make us like Himself by grace!

Let us take courage then, in our hero, the Lord Jesus Christ. He is our champion, and He will never abandon us! He after all, made us His brethren and co-heirs. He made us children of His heavenly Father by adoption. Don’t be distracted by all the noise and chaos that the evil demons are provoking in the world around us. In these difficult times, we must remember who the real enemy is. It is not our neighbor, in whom we must see Jesus Christ.

Let us strive to be more like Him, because this world needs it so much. 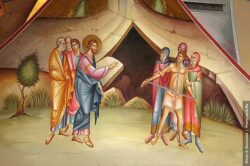