You are here: Home / About Us / Clergy

Father John’s previous parish was St. Innocent in Pleasanton, California, for about seven years. Before that he was attached to St. Nicholas in Saratoga, California, assisting Father Basil Rhodes. It was while attending St. Nicholas in Saratoga that Father John was ordained to the diaconate and priesthood by His Eminence Archbishop Benjamin of San Francisco. Both ordinations happened on May 9, the Feast of the Translation of the Relics of St. Nicholas to Bari.

Father John and Matushka Eva lived for six years in Thessaloniki, Greece, where Father John studied theology. Their daughter Anna accompanied them there, and Melanie and Maria were both born in Thessaloniki. Naomi and Nicholas were born a few years after returning to the United States.

Father John is looking forward to serving the parish of St. Nicholas and welcoming friends, visitors, and seekers here in Portland! 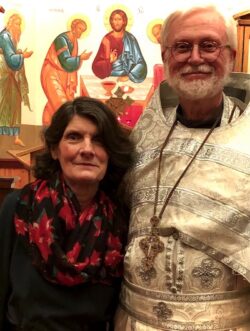 Father David has 43 years of pastoral experience, beginning in 1976.

For 24 years, from 1986 until 2010, Father David and Matushka Elaine ran Raphael House of San Francisco, a shelter for families in crisis. In his last year at Raphael House, he commuted to Denver every weekend to serve at Holy Transfiguration Cathedral, where he was rector for four years.

In 2013–14 Father David and Matushka Elaine lived in Cambridge, U.K., where Father David studied at the Institute for Orthodox Christian Studies and served as the second priest at St Ephraim’s Orthodox Church.

Since returning to the United States, Father David has served as interim rector for parishes awaiting a permanent priest: Menlo Park, California (2015), Calhan, Colorado (2017), Vancouver, Washington (2018), and briefly here at St Nicholas (2019) after Father George Gray retired and before Father John Karcher and his family arrived in September 2019. In May 2021, Father David was assigned to St Nicholas as assistant priest. He also travels monthly to serve at the OCA mission in Helena, Montana. As the second priest at St Nicholas, Father David is free to fill in at other parishes around the diocese, and he travels frequently.

Father David has served on many Church and charitable boards, some of which are listed below:

Father David studied religion and philosophy at Birmingham-Southern College, did graduate certificate work in non-profit management at the University of San Francisco, and earned his master’s in pastoral theology in Cambridge. IOCS. He is a member of the American Academy of Religion and a participant in the Society of Biblical Literature.

Deacon Igor Beskorovaynyy has been a member of St. Nicholas Church since 2007 after moving to the United States from Russia. For several years, he served St. Nicholas parish as a reader and a subdeacon, and in 2014 he was ordained to the diaconate by His Eminence Archbishop Benjamin of San Francisco.

In 2008, Deacon Igor and his wife Nina completed a two-year educational program at the Orthodox Theological College in Moscow, Russia. In 2010-18, while living and working in the United States, Deacon Igor received a distance theological education at St. Philaret’s Orthodox Christian Institute in Moscow that he finished after completing and defending a thesis in liturgical theology.

Deacon Igor and his wife Nina have two daughters, Yana and Anna, who both were born in the United States and baptized at St. Nicholas Church.

In addition to his ministry at St. Nicholas parish, Deacon Igor works as a full-time computer engineer.