You are here: Home / Sermons / Homily for the Sunday of Orthodoxy 2021 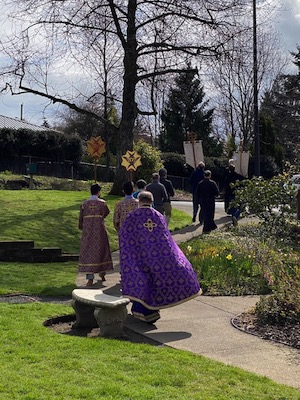 We have made it through our first week of Great Lent/COVID Edition/Part II! I can remember last year, on the Sunday of Orthodoxy, we had our last “normal” service in our church, then later that day we had Sunday of Orthodoxy Vespers at Holy Trinity Cathedral. This has been quite a year, for me personally, spending the majority of my time here now in strange conditions. We have, unwillingly of course, been learning how to persevere through great difficulty. How to be patient. How to hold fast to our faith, just as so many before us throughout the ages, all over the world have had to do.

On this Sunday, we commemorate and celebrate the “Triumph of Orthodoxy.” This is in remembrance of the restoration of the proper veneration of holy icons in churches and in homes, in the year 843. But wait, wasn’t this question answered and dealt with in the 7th Ecumenical Council in Nicea, in the year 787? Yes! It was! The struggles and persecutions at the hands of the iconoclasts had already been roiling and boiling for about 60 years already! In 787 under the Empress Irene, the 7th Ecumenical Council rejected as heresy the teachings of the iconoclasts. At this point you would have thought it would be over, but later when new emperors came into power, Leo V, Michael II, and Theophilus, the iconoclastic assaults and persecutions began again. This lasted another 25 years until we come to the event we are celebrating today, the final “Triumph of Orthodoxy” in the year 843 under Empress Theodora.

Could you imagine living in such conditions? Not just a year or two, but multiple lifetimes the Church was made to suffer persecution from the iconoclastic heresy. Many people were born, lived their lives, and died without the issue being fully settled, without being freely able to worship in the Orthodox manner. Having been accused of idolatry, the Church hymnographers composed hymns which taught and clarified the Church’s understanding of icons and their use in worship. The same theology of the icons of Christ apply also to the icons of the Mother of God and the Saints.

In the service of Great Vespers we sing:

Thou who art uncircumscribed, O Master, in Thy divine nature wast pleased in the last times to take flesh and be circumscribed; and in assuming flesh, Thou hast also taken on Thyself all its distinctive properties. Therefore we depict the likeness of Thine outward form, venerating it with an honor that is relative. So we are exalted to the love of Thee, and following the holy traditions handed down by the apostles, from Thine iron we receive the grace of healing.

As a precious adornment the Church of Christ has received the venerable and holy icons of the Saviour Christ, of God’s Mother and of all the saints. Celebrating now their triumphant restoration, she is made bright with grace and splendor, and drives away all heretics. With great rejoicing she gives glory unto God who loves mankind, and who for her sake has endured His voluntary Passion” (from the Lenten Triodion: Kallistos Ware).

And then with more theological depth we are instructed as we sing:

Advancing from ungodliness to the true faith, and illumined with the light of knowledge, let us clap our hands and sing aloud, offering praise and thanksgiving to God; and with due honor let us venerate the holy icons of Christ, of the all-pure Virgin and the saints, whether depicted on walls, on wooden panels or on holy vessels, rejecting the impious teaching of the heretics. For, as Basil says, the honor shown to the icon passes to the prototype it represents… (ibid)

If you had been here for matins, you would have heard much more, and even more joyful hymnography of the Church expressing her gratitude to God for the gift of the Holy Icons.

Now we know these painted icons are important for us. They express our faith not in words, but in pictures. They depict the reality of the Lord’s incarnation, which is the very reason He may be depicted in icons. And we are taught not only about the events, and the holy people who lived those events, but we are reciprocally blessed by these holy personages. The honor and love we express to the Lord and His Saints when we venerate the Holy Icons, as we just heard, passes through the icon, and goes to the prototype. When we venerate the icon of our Lord, we are communicating and communing with Him, not the wood or the paint, or the canvas. And so it is the same with the icons of His Holy ones.

We love and appreciate our icons. Many of you sacrificed personally to help bring about the beauty that you see before you in this holy church. And so you have an even deeper attachment to these icons in particular.

But we realize these icons are just copies, not the originals, not the prototypes. And in speaking of icons, we know that Jesus Christ has said that He and the Father are one. In fact,

“Philip said to him, “Lord, show us the Father, and that will be enough for us!”9 Jesus answered, “I have been with you for such a long time, and still, do you not know me, Philip? Whoever has seen me has seen the Father! So how can you say, ‘Show us the Father?’” (Jn 14:8–9).

And what about the first time in the Bible where we read about icons? Of course in Genesis we read: “So God created man in his own image, in the image of God created he him; male and female created he them” (Ge 1:27). So you see here, another kind of icon is mentioned in the beginning! Living icons, icons of the Lord!

We have mentioned above icons, and prototypes. It is interesting that Nicholas Cabasilas, a contemporary of St. Gregory Palamas in the 14th century, considers that Jesus Christ, the incarnate Jesus, is the prototype after which mankind is the image. “It was not for the new man that human nature was created at the beginning, and for him mind and desire were prepared. Our reason we have received in order that we may know Christ, our desire in order that we might hasten to Him…It was not the old Adam who was the model for the new, but the new Adam (Christ) for the old… We must… regard Christ as the Archetype and the former Adam as derived from Him. For it is most absurd to regard the most perfect of all things as striving towards the imperfect, and to posit the inferior as the model of the superior, as though the blind were to lead those who see!” (The Life in Christ pp 190-191)

Brothers and sisters, the “Triumph of Orthodoxy” is not just about one historical event. But it is also about an ongoing struggle of the Church against the evil one, to find that lost coin, to return the lost sheep, to restore, renew, and heal the image of Christ in each one of us, and all those who have gone before us and will come after us.

Image, Icon, these words are the same. Think of how we honor these images, and the honor, as we are taught, passes through to the prototype, ie. Christ, and His Saints. It occurs to me, that if we were to show contempt, or dishonor to these holy icons, then that dishonor or contempt passes through to the prototypes in a similar fashion. There is an icon of the Mother of God in one of the monasteries on Mt. Athos. This icon is called “Portaitissa”, and is kept at the Iviron Monastery. This icon is the prototype of the well known Hawaiian “Iverskaya” icon of the Mother of God. Our tradition says this is one of the icons of the Mother of God that was painted by the Apostle Luke. Back during the iconoclastic period, this icon which was at the time located in Nicea, was stabbed in the face or neck by a soldier. When this happened, blood immediately began to flow from the cut that was made on the icon of the Mother of God. This cut is still visible today on the icon.

If this is true of the painted depictions of our Lord, that the honor, or dishonor, that we direct towards them passes on to the prototype, what about people. Our neighbors, also made in the image of God, also icons of our Lord. Remember the gospel reading we heard very recently here in Church, about the sheep and the goats:

If we are willing to show honor, respect, and even love towards these painted icons we see in front of us, because of who are depicted in those holy images, let us also remember that we should show honor, respect, and even love to the flesh and blood icons that we see all around us each and every day. Let this Triumph of Orthodoxy not be merely an observance of an historical event in the past, but let it help us to generate a new Christian realization of the reality we see around us. Let it help all of us to see Christ in our neighbors, and help us to have more compassion, empathy, and love. Because the honor and the love which we show to all those living icons, passes through to the Prototype.