You are here: Home / Icons / King David, the ‘Sweet Singer of Israel’ 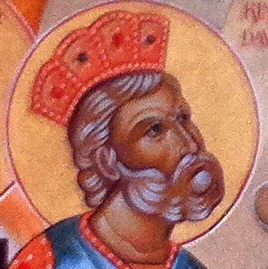 David, the King and Prophet, the “sweet singer of Israel,” is in the front left row next to the central medallion.

David is not the chronological first of our hymnographers, but he is the patron of poetic prayer and praise. The Book of Psalms has been traditionally and universally called the Psalms of David, even though within the text of the Psalms, some are credited to other writers, such as Asaph and “the sons of Korah.” Other psalms, such as 137, are of anonymous authorship, written at the time of the Babylonian Captivity. David stands for all psalmists.

King David is also credited with establishing singing to accompany the sacrifices and feasts of Israel.

In the New Testament, the Psalms are quoted more than any other scripture.  Here, David’s scroll contains a line from Psalm 77:14-15: “Who is so great a god as our God?  You are the God Who works wonders!”  This is a familiar refrain to the Orthodox who sing it at the second vespers of the great feasts of Nativity, Pascha and Pentecost.

Get the collection in a handy booklet, A Guide to the Wall of Hymnographers and Poets, by Tracey Edson, available from the parish or from Amazon.com.