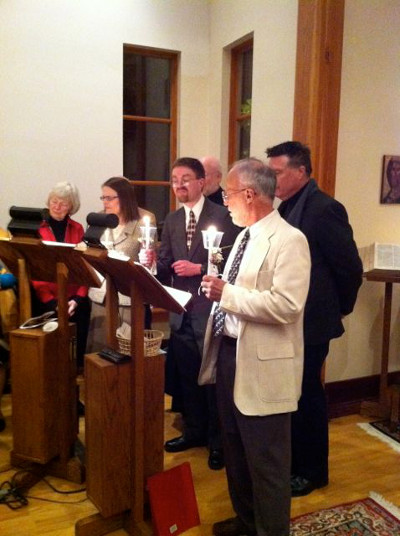 When reading about Orthodox services, say in a church news article, it will often say, “The responses were sung by” and then give the name of the choir. This is key: “the responses.”

When Orthodox prayer begins, the presider sings a blessing (“Blessed is our God…” or “Blessed is the Kingdom…”) to which all respond, “Amen.” This gets the ball rolling in a very real sense. The dialogue has begun, and it will twist and turn and make use of text from all over the place, including psalms from the sixth century before Christ to first-century passages of the New Testament to fifth-century prayers to 10th-century hymns.

The dialogue doesn’t always flow smoothly or logically, at least in an overtly planned sort of way. After all, it is a collection of poems, prayers, and acclamations accumulated over the course of many centuries from many places. And this dialogue has had to keep going through many disruptions of life, faith, and understanding. Like an orally recited epic poem, it grows, organically, through time and experience.

The key to this hodge-podge of text is the idea and practice of response. If at first, solemnity, group action, and building size led toward a simple, improvised way of responding, then over time these responses took on greater character, musical sophistication, and artistic beauty.

By this day and age, these responses have passed through many cultures, singers, languages, and musical idioms. When one arrives for a service at St. Nicholas Church – whether a simple vespers on a weekday or a solemn liturgy for a feast – one is encountering many centuries of musical practice as it has distilled in this small community of Americans on Dolph Court in Portland, Oregon, in the early 21st century.

St. Nicholas Church was founded by a Serb priest in the late 19th-century and was a simple prayer-house for the many different kinds of Orthodox Christians in the area: Russians, Arabs, Greeks, etc. Over time, it grew to take on the marked character of a Russian Orthodox parish, with that way of doing things, including its style of chant.

This manner of church singing grew out of purposeful reforms in church music that occurred in the imperial court at St. Petersburg, as several western composers of music came and taught western harmony and musical practice to the singers of the court chapel. Mixing that with the musical traditions of southwestern Russian and the Ukraine, there grew a strong choral way of singing that included four-part harmony and mixed choirs (men and women) of laymen (as opposed to formal church singers).

It is this basic body of music which became and remains the bedrock of our music at St. Nicholas. It is characterized by leadership from a mixed choir of voices singing in harmony (versus unison singing of a single melodic line — monody — which was the most traditional in the Orthodox world). With this emphasis upon choral and harmonic singing, the practice of strong congregational singing was somewhat lost. That is still apparent at St. Nicholas, where congregational singing is definitely practiced, but by custom still takes a backseat to the choir.

Much of the harmonic music that is used is of two varieties: Music that arranges traditional melodies and music that is originally composed. Since it has been three centuries of choral practice, much of that music has for a very long time taken on a traditional character. Music that is newly written has the responsibility of matching or conforming to the ethos and spirit of this long-accepted music. This is often called churchly in character and is not easily defined. Such qualities can quickly become mere sentiment or unthoughtful imitation. But it’s true, nonetheless, that even in new music the congregation must recognize the spirit of the liturgy they pray.

Given the eclectic and convert nature of this parish, it stands to reason that the music that for so long formed the backbone of this church’s musical expression can no longer do so automatically. The tapestry of melodies and harmonies cannot merely duplicate the past. The past has no corner on the market of quality, and the early attempts at making this music speak in English have seen their (laudable) day, and later attempts have been much more successful.

Furthermore, the American Orthodox landscape is not Russian; it is polyglot. And where the received music of 18th-century imperial Russia was strong on block harmony, it was rather weak on beautiful melody. Other musical traditions and sources have helped to supply this want. Not only so, but new generations of musicians in the Church have tried their hand at composing music in a fresh musical language that nonetheless is “churchly” in character and have been successful.

The result is a musical tapestry at St. Nicholas that includes strong musical elements from medieval Russian, Carpatho-Rusyn and Galician, Kievan, Greek and Arab Byzantine, Latin, Bulgarian, Romanian, Serbian, and Anglican sources, as well as original American and European. Our own choir directors over the last 30 years have contributed original music to the services here and left their indelible stamp.

The goal isn’t in itself to develop such a diverse repertoire, but to make use of chants and forms that fit at St. Nicholas. In Orthodoxy, like every other religious tradition in the world, it is customary for a community to have its own musical language and tradition, a single body of chant that serves its diverse liturgical and expressive needs. Over centuries, this body of chant reflects the theological and spiritual character and ideals of that community. But many communities in America find themselves to be in a community that has not inherited such a singular musical system. Or that the imperial Russian inheritance alone is inadequate to the spiritual and cultural character of life here and now.

For good or ill, the Church in many places finds itself in musical flux. Within that dynamic, musical creativity, understanding, and discernment are necessary, as the foundations are being laid for another cohesive musical edifice to be raised – within the western world made up of western people who have embraced and inherited the Eastern Orthodox Faith.