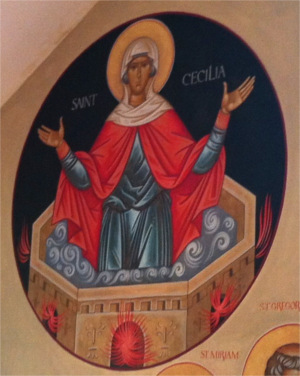 St. Cecilia, an early Christian martyr and patroness of music, continues the theme of flame and praise in the upper far-left medallion. The scene depicts St. Cecilia in a boiling cauldron. The cauldron is shaped in that octagonal form, like a font.

Martyrs offer their lives up to Christ, following in His steps to death, thus being baptized into His death. In the account of St. Cecilia’s death, she is mentioned as singing praise. Centuries later, she was made patroness of the Academy of Music in Rome and has long been called the “patroness of music.” This appellation has taken on a rich life in the Western Church and culture, where many notable works of poetry and music have been written in her honor and concerts of music offered on her feast day (November 22).

In this mural, she forms a New Testament corollary to the Old Testament youth.

Get the collection in a handy booklet, A Guide to the Wall of Hymnographers and Poets, by Tracey Edson, available from the parish or from Amazon.com.