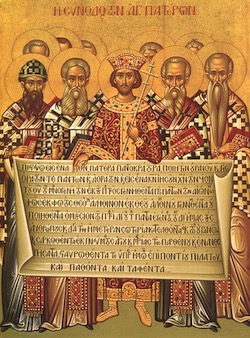 The Angelic Powers were at Your tomb; the guards became as dead men. Mary stood by Your grave, seeking Your most pure body. You captured hell, not being tempted by it. You came to the Virgin, granting life. O Lord, Who rose from the dead,// glory to You.

You ascended in glory, O Christ our God, granting joy to Your Disciples by the promise of the Holy Spirit. Through the blessing, they were assured that You are the Son of God,// the Redeemer of the world!

You are most glorious, O Christ our God! You have established the Holy Fathers as lights on the earth. Through them You have guided us to the true Faith.// O greatly compassionate One, glory to You!

The Apostles’ preaching and the Fathers’ doctrines have established one Faith for the Church. Adorned with the robe of truth, woven from heavenly theology,// It defines  and glorifies the great mystery of piety.

When You had fulfilled the dispensation for our sake, and united earth to heaven: You ascended in glory, O Christ our God, not being parted from those who love You, but remaining with them and crying:// “I am with you, and there is no one against you!”

Blessed are You, O Lord God of our fathers, / and praised and glorified is Your Name forever! (Song of the Three Holy Children, v. 3)
V. For You are just in all that You have done for us! (v. 4)

For Paul had decided to sail past Ephesus, so that he would not have to spend time in Asia; for he was hurrying to be at Jerusalem, if possible, on the Day of Pentecost. From Miletus he sent to Ephesus and called for the elders of the church.

And when they had come to him, he said to them: “You know, from the first day that I came to Asia, in what manner I always lived among you, Therefore take heed to yourselves and to all the flock, among which the Holy Spirit has made you overseers, to shepherd the church of God which He purchased with His own blood. For I know this, that after my departure savage wolves will come in among you, not sparing the flock. Also from among yourselves men will rise up, speaking perverse things, to draw away the disciples after themselves. Therefore watch, and remember that for three years I did not cease to warn everyone night and day with tears. So now, brethren, I commend you to God and to the word of His grace, which is able to build you up and give you an inheritance among all those who are sanctified. I have coveted no one’s silver or gold or apparel. Yes, you yourselves know that these hands have provided for my necessities, and for those who were with me. I have shown you in every way, by laboring like this, that you must support the weak. And remember the words of the Lord Jesus, that He said, ‘It is more blessed to give than to receive.’”

And when he had said these things, he knelt down and prayed with them all.

V. The Lord, the God of gods, speaks and summons the earth from the rising of the sun to its setting. (Ps. 49:1)
V. Gather to Me My venerable ones, who made a covenant with Me by sacrifice! (Ps. 49:6)

Commemoration of the Holy Fathers of the First Ecumenical Council

On the seventh Sunday of Pascha, we commemorate the holy God-bearing Fathers of the First Ecumenical Council.

The Commemoration of the First Ecumenical Council has been celebrated by the Church of Christ from ancient times. The Lord Jesus Christ left the Church a great promise, “I will build My Church, and the gates of hell shall not prevail against it” (Mt. 16:18). Although the Church of Christ on earth will pass through difficult struggles with the Enemy of salvation, it will emerge victorious. The holy martyrs bore witness to the truth of the Savior’s words, enduring suffering and death for confessing Christ, but the persecutor’s sword is shattered by the Cross of Christ.

Persecution of Christians ceased during the fourth century, but heresies arose within the Church itself. One of the most pernicious of these heresies was Arianism. Arius, a priest of Alexandria, was a man of immense pride and ambition. In denying the divine nature of Jesus Christ and His equality with God the Father, Arius falsely taught that the Savior is not consubstantial with the Father, but is only a created being.

A local Council, convened with Patriarch Alexander of Alexandria presiding, condemned the false teachings of Arius. However, Arius would not submit to the authority of the Church. He wrote to many bishops, denouncing the decrees of the local Council. He spread his false teaching throughout the East, receiving support from certain Eastern bishops.

Investigating these dissensions, the holy emperor Constantine (May 21) consulted Bishop Hosius of Cordova (Aug. 27), who assured him that the heresy of Arius was directed against the most fundamental dogma of Christ’s Church, and so he decided to convene an Ecumenical Council. In the year 325, 318 bishops representing Christian Churches from various lands gathered together at Nicea.

Among the assembled bishops were many confessors who had suffered during the persecutions, and who bore the marks of torture upon their bodies. Also participating in the Council were several great luminaries of the Church: Saint Nicholas, Archbishop of Myra in Lycia (December 6 and May 9), Saint Spyridon, Bishop of Tremithus (December 12), and others venerated by the Church as holy Fathers.

With Patriarch Alexander of Alexandria came his deacon, Athanasius [who later became Patriarch of Alexandria (May 2 and January 18)]. He is called “the Great,” for he was a zealous champion for the purity of Orthodoxy. In the Sixth Ode of the Canon for today’s Feast, he is referred to as “the thirteenth Apostle.”

The emperor Constantine presided over the sessions of the Council. In his speech, responding to the welcome by Bishop Eusebius of Caesarea, he said, “God has helped me cast down the impious might of the persecutors, but more distressful for me than any blood spilled in battle is for a soldier, is the internal strife in the Church of God, for it is more ruinous.”

Arius, with seventeen bishops among his supporters, remained arrogant, but his teaching was repudiated and he was excommunicated from the Church.

In his speech, the holy deacon Athanasius conclusively refuted the blasphemous opinions of Arius. The heresiarch Arius is depicted in iconography sitting on Satan’s knees, or in the mouth of the Beast of the Deep (Rev. 13).

In the Nicean Creed, the holy Fathers set forth and confirmed the Apostolic teachings about Christ’s divine nature. The heresy of Arius was exposed and repudiated as an error of haughty reason. After resolving this chief dogmatic question, the Council also issued Twelve Canons on questions of churchly administration and discipline.

Also decided was the date for the celebration of Holy Pascha. By decision of the Council, Holy Pascha should not be celebrated by Christians on the same day with the Jewish Passover, but on the first Sunday after the first full moon of the vernal equinox (which occurred on March 22 in 325).

The First Ecumenical Council is also commemorated on May 29.