You are here: Home / Announcements / The Feast of the Transfiguration of our Lord 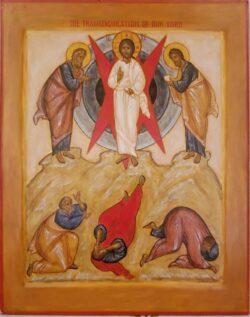 Homily for the Feast of Transfiguration 08-06-20

Now after six days Jesus took Peter, James, and John his brother, led them up on a high mountain by themselves; and He was transfigured before them. His face shone like the sun, and His clothes became as white as the light. And behold, Moses and Elijah appeared to them, talking with Him. Then Peter answered and said to Jesus, “Lord, it is good for us to be here; if You wish, let us make here three tabernacles: one for You, one for Moses, and one for Elijah.” While he was still speaking, behold, a bright cloud overshadowed them; and suddenly a voice came out of the cloud, saying, “This is My beloved Son, in whom I am well pleased. Hear Him!” And when the disciples heard it, they fell on their faces and were greatly afraid. But Jesus came and touched them and said, “Arise, and do not be afraid.” When they had lifted up their eyes, they saw no one but Jesus only. Now as they came down from the mountain, Jesus commanded them, saying, “Tell the vision to no one until the Son of Man is risen from the dead.”

What a beautiful Feast we are celebrating today! The Feast of the Transfiguration! The disciples were witnesses to the Lord shining in glory! They saw Him speaking together with Moses and Elijah! In our Gospel reading today, there’s no real transition from going up on the mountain, to suddenly seeing Christ transfigured. But in our Matins Gospel there are some slight differences. In Matthew we hear that “after six days” they went up the mountain with Jesus. But in Luke’s Gospel, which we heard at matins, it says “about eight days after these sayings,” etc. And we hear that as Jesus was was transfigured, and was speaking with Moses and Elijah, Peter, James, and John were both still “heavy with sleep”. So it’s not as if they just walked up the mountain, and “boom!” the Transfiguration happened!

Night fell, the disciples slept, Jesus prayed. Again as He shows us so often, how important it is to pray, and as the Fathers say, night time is the best time for prayer, while it is quiet, and peaceful.

But what happened before this? Both Gospels I mentioned start off with indicating something had just happened. They both refer to a time period, “after six days”, or “about eight days after these sayings”.

In the Gospel of Matthew 16: 21, we hear “From that time Jesus began to show to His disciples that He must go to Jerusalem, and suffer many things from the elders and chief priests and scribes, and be killed, and be raised on the third day.” So He, Jesus, is starting to prepare His disciples for what He is about to suffer for us. And consequently, He is preparing His disciples for this trauma they are about to witness. In verse 24, Jesus says “If anyone desires to come after Me, let him deny himself, and take up his cross, and follow me. For whoever desires to save his life will lose it, but whoever loses his life for My sake will find it.” And finally in vs. 28 Jesus says, “Assuredly, I say to you, there are some standing here who shall not taste death till they see the Son of Man coming in His kingdom.”

Then right after this, we start with today’s Gospel reading in Matthew, “Now after six days…”

In the Gospel of Luke in chapter 9 we have the similar words of preparation given to the disciples. In vs. 22 Jesus says, “The Son of Man must suffer many things, and be rejected by the elders and chief priests and scribes, and be killed, and be raised the third day.” And again, in vs. 23, “let him deny himself, and take up his cross daily, and follow me.” Then jumping down to vs. 27 we hear, “But I tell you truly, there are some standing here who shall not taste death till they see the kingdom of God.”

And then in Luke next comes, “Now it came to pass, about eight days after…”

There’s a reason why Jesus brought His disciples up to this mountain, to witness this event. According to one theologian, George Mantzarides;

“By His Transfiguration, Christ, on the one hand, bears witness to His Divinity, which His Disciples had confessed shortly before through the mouth of the Apostle Peter; and, on the other hand, He offers an initial experience of the coming of His Kingdom.

By His Transfiguration, Christ confirms and strengthens faith in His Divinity, which His Disciples had already confessed.

During His Transfiguration, Christ did not assume something that He did not previously possess; rather, He reveals — once again, according to the measure that His Disciples could receive it — the glory that He always possessed as God-Man. In other words, the Glory that His Disciples saw on Mt. Tabor was not some transitory phenomenon, but rather the eternal Light of the Divine Nature of Christ. One of the hymnographers of our Church declares this when he says: “Thou wast transfigured on the mountain, O Christ our God, showing to Thy Disciples Thy Glory as each one could bear it.”

The taste of eternity does not begin after the Cross, but rather with the Cross. Obedience to the Will of God “unto death” already constitutes participation in the resurrection. Just as the Glory of Christ begins with the Cross, which crushes the powers of the Evil One, so also the glory of Christians begins with voluntary acceptance of death for Christ, Who crushes the old man and reveals the new.

The Transfiguration of Christ is preparation for the Cross. And the Cross of Christ is the commencement of His glory as man. By His Transfiguration, Christ does not acquire anything new; rather, He strengthens His Disciples in view of His Crucifixion. His Disciples are in need of this strengthening, in order to face the Cross of their Teacher, as well as their own cross, later, for the Name of their Teacher.

This is a revelation to the disciples, and by extension to us who’ve come after, of Who Jesus really is. This was not some sort of light show, but this was Christ, allowing His disciples to see beyond the surface, to see through that superficiality and see with their souls the divinity of Christ, that has been united to His humanity, our humanity. (His by nature, ours by Grace) In our Church we sing every year this verse from Galatians: “27 For as many of you as have been baptized into Christ have put on Christ.”  (Ga 3:27). Think about what this means. Think about what Christ has revealed to us, and think about what Jesus said to His disciples. The Apostle Paul tells the Romans:

“3 Or do you not know that all {of us} we who were baptized into Christ Jesus were baptized into his death? 4 And so, we were buried with him through baptism to death, so that just as Christ was raised from the dead by the glory of the Father, [likewise] we might also walk in newness of life. 5 Truly, if we have become united with him in the likeness of his death, we will also be [united with him] by a resurrection like his”’ (Ro 6:3–5).

Let us day by day, consciously “Put on Christ”, so that the Kingdom of Heaven will also be revealed to us in power.

Previous Post: « Homily for Sunday August 2nd, 2020 – Additional thoughts
Next Post: Homily of His Beatitude Metropolitan Tikhon for the Feast of St. Herman of Alaska