Zachariah, Father of John the Baptist

You are here: Home / Icons / Zachariah, Father of John the Baptist 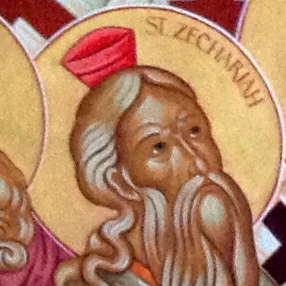 One of a series of posts about the saints featured in the mural of poets and hymnographers of the Church.

Zachariah (left front middle) is the father of John the Baptist and Forerunner, and his canticles appears in the Gospel of St. Luke.

Zachariah’s wife, Elizabeth, received one of those miraculous children, as Hannah did, and Zachariah’s song of praise begins,

“Blessed is the Lord, the God of Israel,
for He has visited and redeemed His people.
He has raised up a horn of salvation for us in the house of His servant, David.”
(Luke 1:68-69)

His canticle sees the birth of St. John as the announcement of the coming of the Messiah, who brings “light to those who sit in darkness,” a phrase that itself is a quote from the prophet Isaiah (9:1).

The canticle of Zechariah is a fixed part of Matins, but because of its placement, it is usually omitted. At St. Nicholas Parish, this canticle is sung during Communion in the Advent-Nativity season, usually with a refrain, “Give light to those who sit in darkness” or “Prepare, O Bethlehem, for paradise is opened to all.”

Return to Hymnographers and Poets

Get the collection in a handy booklet, A Guide to the Wall of Hymnographers and Poets, by Tracey Edson, available from the parish or from Amazon.com.
Previous Post: «

Miriam, Sister of the Prophet Moses
Next Post: Simeon the Elder