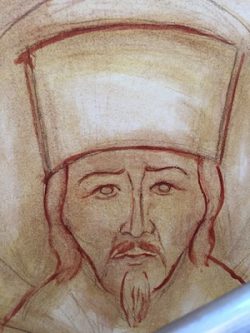 St. Jacob (Yakov) Netsvetov was the first Alaskan Native ordained to the Orthodox priesthood. He spent his priesthood serving the Native peoples of Alaska and the Yukon.

He was born in 1802 in Alaska to a Russian father and an Aleut mother. He attended Irkutsk Theological Seminary two years behind John (later St. Innocent) Veniaminov.

He married Anna Simeonovna in 1825, and in 1828 was ordained to the priesthood.

He returned to his home village of Atka, Alaska, accompanied by his wife and his father, Yegor, now tonsured as a reader.

He traveled his new parish, which stretched nearly two thousand miles along the Aleutian Islands, in a native kayak that provided no insulation from the cold sea. He worked St. Innocent, who was serving in Sitka, to develop a written form of the Native languages and to translate the Scriptures and other texts for the people.

Over the years of 1836-37, he lost his wife to cancer and his home to fire, and his father died as well. He wrote to the bishop in Irkutsk asking to be released to become a monk. The bishop asked him to stay until a replacement arrived, which never happened.

Around 1841, Bishop (later St.) Innocent arrived to take over his new bishop’s seat at Sitka and invited Father Jacob to travel with him. Over the course of three days on the boat, they decided that he would go to minister to tribes of the Yukon territory, with different languages and customs, and colder weather.

From 1844, in failing health, he taught, translated, developed a written language, and healed the sick.

In the 1850s, a literally insane assistant made all kinds of charges against St. Jacob and his deacon. No one believed them, but St. Jacob had to go to Sitka to answer. His health was so bad that the bishop assigned him to a chapel in Sitka, and he died in 1862 at the age of 64.