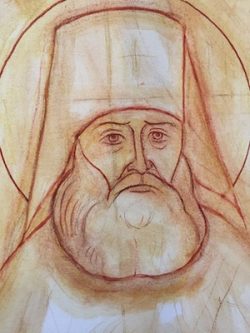 St. Innocent of Alaska was a remarkable man with widely varied gifts — building, mechanics, natural sciences, anthropology, and languages — all of which he put to the service of the people of Alaska and the Russian far east. He became the first resident Orthodox bishop in America and eventually became Metropolitan of Moscow, one of two American saints who have occupied the top seat in the Russian hierarchy.

He was born Ivan Popov in 1797 to the family of a sacristan in Irkutsk, eastern Russia. He was sent to seminary as a child, where he excelled in his studies. In 1814, he was given the last name Veniaminov, after the deceased Archbishop Benjamin of Irkutsk. He was ordained to the priesthood in 1821.

He volunteered to serve in the wilds of Alaska in 1823, and spent a year traveling to the new mission field, along with his aging mother, his wife, his infant son, and his brother Stefan.
Over his career as a missionary priest, he learned native languages and dialects. He emphasized teaching reading and writing and developed an alphabet for Unagan Aleut based on the Cyrillic script.

In 1834, he was transferred to Sitka Island and worked with the Tlingit people.

In 1838, he traveled back to Russia to report on his activities and ask for more resources to expand the mission. During his trip, his wife died, but he took monastic vows, choosing the name Innocent.

It 1840, he was consecrated Bishop of Kamchatka and Kuril Islands in Russia and the Aleutian Islands of Russian America, located in Sitka—making him the first Orthodox bishop in America.
In 1867, on the death of his friend Metropolitan Filaret of Moscow, Bishop Innocent became Metropolitan of Moscow.

He died in 1879 and in 1977 was named a saint by the Church of Russia, at the request of the Orthodox Church in America.