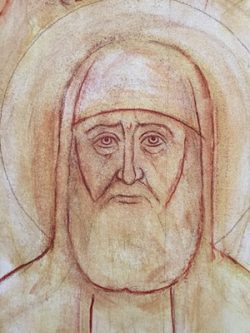 St. Tikhon of Moscow was the American bishop who embraced the Orthodox Church’s role in the North American continent — and then returned to Russia in time to be named the first Patriarch of Moscow in the renewed Russian Church and murdered by the Soviets.

St. Tikhon was born Vasily Ivanovich Belavin in 1865, to the family of a rural priest in the Pskov Province of far-western Russia. He graduated from the St. Petersburg Theological Academy in 1888 at the age of 23 and took monastic vows in 1891, receiving the name Tikhon after St. Tikhon of Zadonsk.

In 1898, he became Bishop of the Aleutians and Alaska.

He reorganized the diocesan structure and changed the name of the dicese to Diocese of the Aleutians and North America in 1900.

In 1902 he consecrated the Church of St. Nicholas in Brooklyn for Syrian Orthodox immigrants and St. Nicholas Cathedral in New York.

He encouraged the use of English in the Liturgy and, working with St. Alexis Toth, welcomed former Eastern-rite Catholics who had immigrated from Europe and received a harsh reception from the ruling Catholic bishop in the United States.

In 1905, the American mission became and Archdiocese, and Archbishop Tikhon had two vicar bishops: Bishop Innocent (Pustynsky) in Alaska and St. Raphael (Hawaweeny) in Brooklyn. That year he gave his blessing to establish St. Tikhon’s Monastery in Pennsylvania.

In 1907 he returned to Russia and became the Archbishop of Yaroslavl.

He became a member of the new Synod in Russia which in 1917 opened a council to restore the Russian Orthodox Church to canonical norms, especially the patriarchiate, which had been vacant since the reign of Tsar Peter I in the 1700s.

As head of the Christian Church in Russia, he came into conflict with the Bolsheviks and then the Soviets. Clergy and other believers were subject to wholesale slaughter. The government was raiding the coffers of the Church, including liturgical items, ostensibly for charitable work. The Soviets were supporting what they called the Living Church to supplant Orthodoxy in Russia.