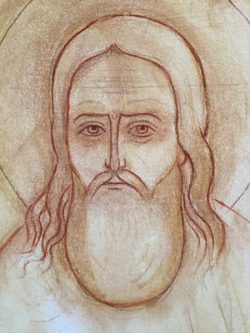 St. Herman is arguably the best-loved saint of North America. A monk who traveled to Alaska in the overland journey of the first mission to America in 1794, he lived on a small island off the coast of Kodiak and spent his life in service to the Natives around him.

He was born in 1760, or possibly 1756, to a merchant family whose name is lost to history (although some historians disagree). He went into the Trinity-Sergius Hermitage near St. Petersburg at age 16. In his early 20s, he moved to Valaam Monastery, on scattered islands in Lake Ladoga.

He took to living in the wilderness there, returning to the community for holy days. In 1793, he was one of 10 of the monks chosen for the first Russian mission to America, to serve the employees of the Russian-American Company and the Natives of Alaska.

After about five years, all of the others in the party had died, leaving St. Herman alone in a remote wilderness.

He chose Spruce Island for his home, and named it New Valaam. He dug a cave and build a cell over it to live in. He later built a wooden chapel and a wooden house to be used as a schoolhouse and a guesthouse.

He lived there more than 40 years, growing his own food, teaching the children, and ministering to the Natives. He accomplished amazing feats of strength and asceticism. He advocated for the Natives when the Russians treated them unfairly. The stories about the saint are many and amazing. And his chapel on Spruce Island is still the site of an annual pilgrimage.

He became the first saint who lived in America and his canonization in 1964 was the first that happened on this continent.