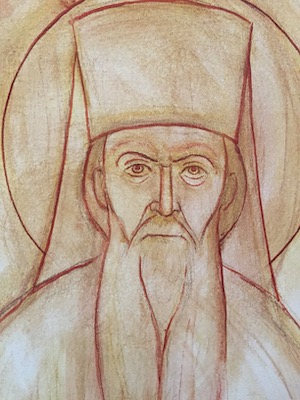 Bishop Nikolai (Velimirovich) was the author of dozens of works in several languages. The most famous work is the thousand-page Prologue of Ochrid—lives of the saints arranged according to the Church calendar.

He was born Nikola Velimirovich to pious farmers in western Serbia. He attended the Seminary of St. Sava in Belgrade.

Over the course of his academic career, he studied in Switzerland, Germany, England, and Russia.

In 1909 a life-threatening illness caused him to promise God that if he lived he would be come a monk. He was tonsured as Nikolai and ordained to the priesthood in 1909.

His travels took him away from and back to his home country many times through his life, during the wars and tumultuous changes of the 20th century.

During World War I, he made his first trip to the United States to raise support for Serbia in its war effort. He returned to Belgrade near the end of the war and helped build the new Yugoslav state.

In 1919 he became the Bishop of Zica. In 1921, he was transferred to the Diocese of Ochrid and Bitola, near the Albanian border.

He traveled to the United States several times from the 1920s to the end of his life. He was instrumental in organizing the Serbian Orthodox Diocese of North America, working with Bishop St. Mardarije (Uskovic).

He spent two years in the Dachau concentration camp, and at the end of World War II, he came to spend his last years in the United States. He was professor and rector at St. Tikhon Seminary in Pennsylvania, and also taught at St. Vladimir’s Seminary and Holy Trinity Seminary, both in New York.