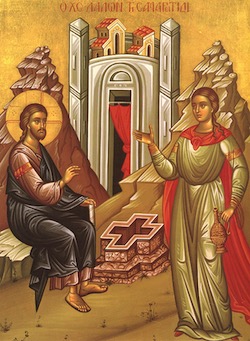 When the women disciples of the Lord learned from the angel the joyous message of Your Resurrection, they cast away the ancestral curse and elatedly told the apostles: “Death is overthrown! Christ God is risen,// granting the world great mercy!”

In the middle of the feast, O Savior, fill my thirsting soul with the waters of piety, as You cried to all: “If anyone thirst, let him come to Me and drink!”// O Christ God, Fountain of our life, glory to You!

The Samaritan Woman came to the well in faith; she saw You, the Water of wisdom and drank abundantly.// She inherited the Kingdom on high, and is ever glorified!

Christ God, the Creator and Master of all, cried to all in the midst of the feast of the Law: “Come and draw the water of immortality!” We fall before You and faithfully cry:// “Grant us Your mercies, for You are the Fountain of our life!”

Now those who were scattered after the persecution that arose over Stephen traveled as far as Phoenicia, Cyprus, and Antioch, preaching the word to no one but the Jews only. But some of them were men from Cyprus and Cyrene, who, when they had come to Antioch, spoke to the Hellenists, preaching the Lord Jesus. And the hand of the Lord was with them, and a great number believed and turned to the Lord.

Then news of these things came to the ears of the church in Jerusalem, and they sent out Barnabas to go as far as Antioch. When he came and had seen the grace of God, he was glad, and encouraged them all that with purpose of heart they should continue with the Lord. For he was a good man, full of the Holy Spirit and of faith. And a great many people were added to the Lord.

Then Barnabas departed for Tarsus to seek Saul. And when he had found him, he brought him to Antioch. So it was that for a whole year they assembled with the church and taught a great many people. And the disciples were first called Christians in Antioch. Then the disciples, each according to his ability, determined to send relief to the brethren dwelling in Judea. This they also did, and sent it to the elders by the hands of Barnabas and Saul.

So He came to a city of Samaria which is called Sychar, near the plot of ground that Jacob gave to his son Joseph. Now Jacob’s well was there. Jesus therefore, being wearied from His journey, sat thus by the well. It was about the sixth hour. A woman of Samaria came to draw water.

Jesus said to her, “Give Me a drink.” For His disciples had gone away into the city to buy food.

Then the woman of Samaria said to Him, “How is it that You, being a Jew, ask a drink from me, a Samaritan woman?” For Jews have no dealings with Samaritans.

Jesus answered and said to her, “If you knew the gift of God, and who it is who says to you, ‘Give Me a drink,’ you would have asked Him, and He would have given you living water.”

The woman said to Him, “Sir, You have nothing to draw with, and the well is deep. Where then do You get that living water? Are You greater than our father Jacob, who gave us the well, and drank from it himself, as well as his sons and his livestock?”

The woman said to Him, “Sir, give me this water, that I may not thirst, nor come here to draw.”

Jesus said to her, “Go, call your husband, and come here.”

The woman answered and said, “I have no husband.”

Jesus said to her, “You have well said, ‘I have no husband,’ for you have had five husbands, and the one whom you now have is not your husband; in that you spoke truly.”

The woman said to Him, “Sir, I perceive that You are a prophet. Our fathers worshiped on this mountain, and you Jews say that in Jerusalem is the place where one ought to worship.”

Jesus said to her, “Woman, believe Me, the hour is coming when you will neither on this mountain, nor in Jerusalem, worship the Father. You worship what you do not know; we know what we worship, for salvation is of the Jews. But the hour is coming, and now is, when the true worshipers will worship the Father in spirit and truth; for the Father is seeking such to worship Him. God is Spirit, and those who worship Him must worship in spirit and truth.”

The woman said to Him, “I know that Messiah is coming” (who is called Christ). “When He comes, He will tell us all things.”

And at this point His disciples came, and they marveled that He talked with a woman; yet no one said, “What do You seek?” or, “Why are You talking with her?”

The woman then left her waterpot, went her way into the city, and said to the men, Come, see a Man who told me all things that I ever did. Could this be the Christ? Then they went out of the city and came to Him.

In the meantime His disciples urged Him, saying, “Rabbi, eat.”

But He said to them, “I have food to eat of which you do not know.”

Therefore the disciples said to one another, “Has anyone brought Him anything to eat?”

Jesus said to them, “My food is to do the will of Him who sent Me, and to finish His work. Do you not say, ‘There are still four months and then comes the harvest’? Behold, I say to you, lift up your eyes and look at the fields, for they are already white for harvest! And he who reaps receives wages, and gathers fruit for eternal life, that both he who sows and he who reaps may rejoice together. For in this the saying is true: ‘One sows and another reaps.’ I sent you to reap that for which you have not labored; others have labored, and you have entered into their labors.”

And many of the Samaritans of that city believed in Him because of the word of the woman who testified, “He told me all that I ever did.” So when the Samaritans had come to Him, they urged Him to stay with them; and He stayed there two days. And many more believed because of His own word. Then they said to the woman, “Now we believe, not because of what you said, for we ourselves have heard Him and we know that this is indeed the Christ, the Savior of the world.”

God doesn’t impose himself on people in a high-handed manner. The kingdom of God isn’t a kingdom of imperious authority but of interactive love and freedom. It’s a communion which offers boundless love and freedom. But when people reject God’s offer, they’re short-circuited within their self and make their own punishment. In this way, even from this transitory life they enter hell and despair.

In his penetrating work On the Life in Christ, Saint Nikolaos Kavasilas writes that life in Christ is born in this present life and completed in the future. And it can’t be brought to completion in people’s souls, either in the present life or in the future one, unless it starts here. More specifically, he says that, just as there are the bodily senses of sight, smell, hearing, etc. for this life, so there are spiritual senses for the next life. The present life is the workshop in which the spiritual senses are prepared. Those who haven’t acquired spiritual senses here will remain ‘dead and wretched’ throughout eternity. God will offer himself to all as light, but they’ll remain in the dark, like the foolish virgins, because it won’t then be possible to form eyes. The fragrance of the Holy Spirit will fill all things, but they won’t acquire the sense of smell unless it’s already there. Those who haven’t acquired spiritual senses before they depart this present life will have nothing in common with the future one, whereas the friends of God, having spiritual senses, will share in eternal bliss with Christ (PG. 150, 493B ff.). Pure spiritual senses, a pure heart, make people blessed and able to see God (cf. Matth. 5, 8). With Christ’s resurrection, which constitutes the quintessence of the divine revelation, ‘all things are filled with light’. This isn’t something which is simply to be believed; it can and must be experienced.

Just as Christ was crucified, buried and rose, so his Church, the members of his body, all the true faithful, make their way towards the resurrection through crucifixion and burial. The life of the Church and of the faithful within history might be termed life in the grave. To put it even more clearly, the life of the Church and of its members in the world retains its authenticity only when it’s experienced as life in the grave. Then it’s confirmed that the faithful don’t live according to their own will but in conformity with that of Christ; or that Christ lives within them. As Saint Paul says: ‘I no longer live, but Christ lives in me’ (Gal. 2, 20). This is how the unity of the Church is preserved. It isn’t founded on the life of its members but on the life of Christ. People aren’t called upon to fashion the unity of the Church but to espouse it and observe it. And these things aren’t brought about by noise and activism, but by silence and calm. The faithful are humbled, they’re obedient to their head, who is Christ, they conform to his will and tread his path. They don’t follow new ways and don’t even invent them with their own will and imagination.

~ George Mantzarides, Professor Emeritus of the Theological School of the Aristotle University of Thessaloniki

The end of all sorrow is joy; and of all labor, rest; and of all dishonor, glory… the end of all pain suffered for virtue is to be with God forever, and to enjoy eternal delectation, which will have no end