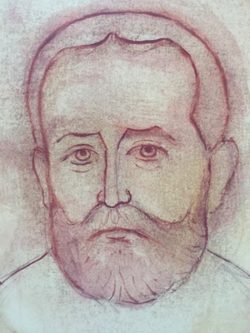 St. Alexis Toth, part of the wave of Eastern European immigrants to America in the late 1800s, arrived as an Eastern-rite priest and eventually led tens of thousands of his fellow Eastern-rite immigrants to the Orthodox Church, helping create a space for Eastern Christian practice in the American culture.

He was born in Slovakia in 1853 to a family of priests. He became a chancellor in the diocese and later director of a seminar and professor of canon law and Church history.

Invited to help build the Church in America, he found the new St. Mary’s Church in Minneapolis deep in debt and bare of furnishings and vestments. He worked part time in a bakery, receiving no salary, while he helped put the church on a stable footing.

As an Eastern-rite Catholic, he paid a visit to Archbishop John Ireland, Roman Catholic Bishop of St. Paul and Minneapolis. Archbishop Ireland had concluded that complete and rapid Americanization was best for the Catholic Church in America. He refused to recognize the Eastern rite as a legitimate Catholic expression. Ultimately, the Eastern-rite priests were to be recalled to Europe, and the Eastern-rite parishes given over to the Latin rite.