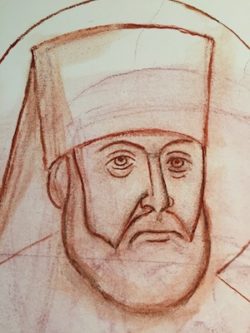 St. Anatole was born Alexei Vasilevich Kamensky in Russia in 1863. After seminary training and marriage, he became a village priest in the Samara Diocese, southwest of Moscow.

After his wife died, he studied for a doctorate in theology at the St. Petersburg Theological Academy, graduating in 1891. He was tonsured a monk with the name Anatole in 1895.

He came to America and served at Archangel Michael Cathedral in Sitka, Alaska.

In 1899, he became head of the missionary school in Minneapolis, Minn., that later became the first Orthodox seminary in North America.

In 1903, he returned to Russia, and in 1906 he became Bishop of Elizavetgrad, in what is now Ukraine. He was a member of the Russian Duma and attended the All-Russian Church Council of 1917-18 in Moscow.

After the Bolshevik revolution, St. Anatole joined the White Army in 1919 and became a lead organizer of “Teams of the Sacred Cross.” The teams committed to a military fight against the Bolsheviks and swore allegiance to Christ, the Church, and each other. Together the teams formed the Brotherhood of the Holy Cross.

The Brotherhood was defeated with Admiral Kolchak’s army in 1919.

After the White Army’s defeat, St. Anatole stayed in Russia, and in 1920 became Bishop of Irkutsk.

The Bolsheviks arrested him and charged him with hiding Church property in 1922. In 1924, he was released from prison and again took up the role of Archbishop of Irkutsk, although thwarted by the government and its “Living Church.” He died in 1924 or 1925; the records are incomplete, with conflicting information.

He was glorified as New Hieromartyr Anatole (Kamensky), Archbishop of Irkutsk.