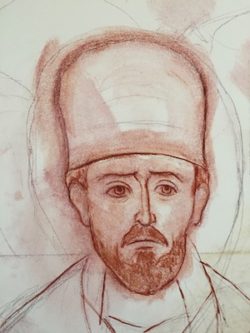 The first Serbian Bishop of American and Canada helped build St. Sava Monastery in Libertyville, Illinois, with his own funds and his own hands. When his casket was opened 80 years after his death, his remains were incorrupt.

The future St. Mardarije, Ivan Uskokovic, was born December 22, 1889, in Podgorica, Serbia. In 1906. He graduated from the Theological Academy in St. Petersburg in 1916.

The Russian Orthodox Church sent him to serve the Serbian Orthodox in America in 1917. Two years later, he went back to Serbia and became head of Rokovica Monastery.

In 1923, he came back to America as deputy to Bishop (now St.) Nikolai (Velimirovic) of Ohrid to lead the American-Canadian Diocese. Two years later, upon St. Nikolai’s return to Belgrade, St. Mardarije continued in the role of administrator.

While he worked to organize the Serbian diocese, he also served as a parish priest in Chicago and laid the foundation for St. Sava Monastery in Libertyville. He bought the land from his own funds, and a visitor to the construction site found the bishop supervising and doing manual labor on the new church building.

In 1926, he was consecrated bishop in Belgrade.

In 1927, he transferred ownership of the property from his own name to the Serbian Orthodox Church and the local diocese. More than 5,000 people attended the consecration of the monastery in 1931.

St. Mardarije died of tuberculosis in 1935 at the age of 46 and was buried at the monastery. In 2015, the Serbian Orthodox Church glorified St. Mardarije with his fellow Serbian missionary, St. Sebastian (Dabovich).