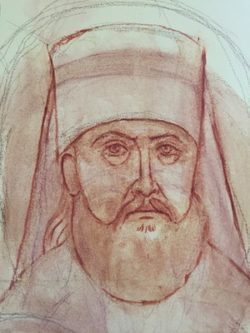 St. Seraphim of Uglich was born Semyon Nikolayevich Samoilovich in the Poltava Province of what is now western Ukraine, in the early 1880s.

After graduating from seminary in 1902, he was sent as a missionary to Alaska, where he served under then-Bishop, later Patriarch, St. Tikhon (Bellavin). In 1905-06, he went through the ranks of monk, deacon, and priest. He worked in the Aleutian Islands and in Sitka, Alaska. He returned to Russia in 1908.

After the start of World War I, he became abbot of the Protection Monastery in Uglich and in 1920 became Bishop of Uglich under Patriarch Tikhon.

The Bolsheviks arrested and imprisoned him from 1922 to 1924, after which he became archbishop and then administrator of the Diocese of Yaroslavl.

After the death of St. Tikhon in 1925, Archbishop Seraphim became the temporary patriarch while the first deputy, Metropolitan Sergius, was in prison.

The Bolsheviks told St. Seraphim to form a new synod of a list of approved bishops. He refused and gave them a list of his own.

When the Bolsheviks released Metropolitan Sergius from prison, he became the official head of the Soviet “Living Church” and in 1927 acceded to all the Bolsheviks’ demands.

The GPU (secret police) asked St. Seraphim to name a successor. He knew that anyone he named would be put into prison, so he replied, “The Lord Jesus Christ Himself.”

Over the next ten years, St. Seraphim was subjected to a series of arrests, imprisonments, and Siberian exiles. During this time, he wrote a heartfelt letter to Metropolitan Sergius asking him to repent.