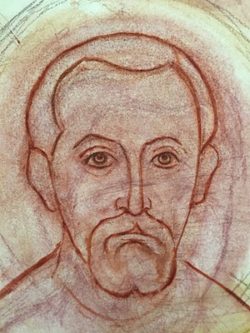 St. Bogolyub of Chisholm is one of three American saints from this iron-mining area around Lake Superior in the United States and Canada.

St. Bogolyub Gakovich lived in America from 1928 to 1935. During that time, he, along with his wife, Kseniya, and three sons, served in parishes in the Iron Range, and in Steelton, Chicago, and Kansas City.

He returned to Plashki in Lika, Yugoslavia, in 1935.

In 1941 the Nazis rounded up his bishop, along with St. Bogolyub and others, and put them into a barn for a month. At the end of that time, they took him to Gospich prison and then to Tadovno Camp.

He was subjected to martyrdom by being tied to another person, their hands and arms bound to each other. The Nazis then shot one person in the head and pushed the two into a deep pit. The other died of the fall or starvation and dehydration.