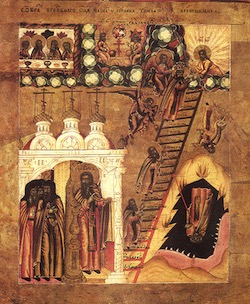 You descended from on high, O Merciful One!
You accepted the three day burial to free us from our sufferings!//
O Lord, our Life and Resurrection, glory to You!

The truth of your deeds has revealed you to your flock as a rule of faith, an image of meekness and a teacher of self-control; your humility exalted you; your poverty enriched you.// O Father Bishop Nicholas, pray to Christ God that our souls may be saved.

By rising from the tomb, You raised the dead and resurrected Adam. Eve exults in Your Resurrection,// and the world celebrates Your rising from the dead, O greatly Merciful One!

You proved yourself to be be a holy priest, O Nicholas. You served God in Myra and lived the gospel of Christ. You offered your life for your people, And rescued the innocent from death. Therefore God has glorified you as a trustworthy guide of things divine.

The Lord truly set you on the heights of abstinence, to be a guiding star,
showing the way to the universe,// O our father and teacher John.

Steadfast Protectress of Christians, Constant Advocate before the Creator;
Do not despise the cries of us sinners, but in your goodness
come speedily to help us who call on you in faith. Hasten to hear our
petition and to intercede for us, O Theotokos, for you always protect those who honor you!

For when God made a promise to Abraham, because He could swear by no one greater, He swore by Himself, saying, “Surely blessing I will bless you, and multiplying I will multiply you.” And so, after he had patiently endured, he obtained the promise. For men indeed swear by the greater, and an oath for confirmation is for them an end of all dispute. Thus God, determining to show more abundantly to the heirs of promise the immutability of His counsel, confirmed it by an oath, that by two immutable things, in which it is impossible for God to lie, we might have strong consolation, who have fled for refuge to lay hold of the hope set before us. This hope we have as an anchor of the soul, both sure and steadfast, and which enters the Presence behind the veil, where the forerunner has entered for us, even Jesus, having become High Priest forever according to the order of Melchizedek.

(For the fruit of the Spirit is in all goodness, righteousness, and truth),
finding out what is acceptable to the Lord. And have no fellowship with the unfruitful works of darkness, but rather expose them. For it is shameful even to speak of those things which are done by them in secret. But all things that are exposed are made manifest by the light, for whatever makes manifest is light. Therefore He says: “Awake, you who sleep, arise from the dead, and Christ will give you light.” See then that you walk circumspectly, not as fools but as wise, redeeming the time, because the days are evil. Therefore do not be unwise, but understand what the will of the Lord is. And do not be drunk with wine, in which is dissipation; but be filled with the Spirit, speaking to one another in psalms and hymns and spiritual songs, singing and making melody in your heart to the Lord.

V. They that are planted in the house of the Lord shall flourish in the courts of our God. (Ps. 91:12)

Then one of the crowd answered and said, “Teacher, I brought You my son, who has a mute spirit. And wherever it seizes him, it throws him down; he foams at the mouth, gnashes his teeth, and becomes rigid. So I spoke to Your disciples, that they should cast it out, but they could not.” He answered him and said, “O faithless generation, how long shall I be with you? How long shall I bear with you? Bring him to Me.” Then they brought him to Him. And when he saw Him, immediately the spirit convulsed him, and he fell on the ground and wallowed, foaming at the mouth. So He asked his father, “How long has this been happening to him?” And he said, “From childhood. And often he has thrown him both into the fire and into the water to destroy him. But if You can do anything, have compassion on us and help us.” Jesus said to him, “If you can believe, all things are possible to him who believes.” Immediately the father of the child cried out and said with tears, “Lord, I believe; help my unbelief!” When Jesus saw that the people came running together, He rebuked the unclean spirit, saying to it: “Deaf and dumb spirit, I command you, come out of him and enter him no more!” Then the spirit cried out, convulsed him greatly, and came out of him. And he became as one dead, so that many said, “He is dead.” But Jesus took him by the hand and lifted him up, and he arose. And when He had come into the house, His disciples asked Him privately, “Why could we not cast it out?” So He said to them, “This kind can come out by nothing but prayer and fasting.” Then they departed from there and passed through Galilee, and He did not want anyone to know it. For He taught His disciples and said to them, “The Son of Man is being betrayed into the hands of men, and they will kill Him. And after He is killed, He will rise the third day.”

The Fourth Sunday of Lent is dedicated to Saint John of the Ladder (Climacus), the author of the work, The Ladder of Divine Ascent. The abbot of Saint Catherine’s Monastery on Mount Sinai (6th century) stands as a witness to the violent effort needed for entrance into God’s Kingdom (Mt 10: 12). The spiritual struggle of the Christian life is a real one, “not against flesh and blood, but against . . . the rulers of the present darkness . . . the hosts of wickedness in heavenly places . . .” (Eph 6.12). St John encourages the faithful in their efforts for, according to the Lord, only “he who endures to the end will be saved” (Mt 24.13).

Excerpts from an article by Hieromonk Makarios of Simonopetra (Mt. Athos)

Fasting Is Our Return to Paradise

If greed cast us out of paradise, then its antidote, fasting, returns us to it. “Adam was banished from paradise for disobedience and rejected from its delight, beguiled by the words of a woman, and sat naked near that place, lamenting and crying out, ‘Woe is me!’ Let us also take care to raise ourselves to the time of fasting, submitting to the Gospel traditions, that by them we might become pleasing to Christ and again reach the habitations of paradise.” Fasting is the destruction of death, which appeared as the consequence of sin. A person who fasts is freed (for now in part, of course) from the laws of the fallen world. He tears apart the infernal circle of the dialectic of lust and satisfaction, hunger and satiety, turning his desires toward the contemplation of paradisal reality. As childhood is an image of angelic life, the restoration of innocence, and the passionlessness of Adam, so also does fasting open to man paradisal life and a foretaste of eternal life, where the chosen will be seen as true angels in the flesh; for the power of their desire will be wholly directed from the flesh to the spirit. Orthodox fasting is deeply penetrated with this eschatological atmosphere. It of course remains a means for acquiring virtues, but it is already deified. It could be said that it is a goal in itself. For example, the rules that forbid eating meat during Great Lent are of course aimed at weakening the flesh; however, by observing them the believer assimilates a new mode of existence: He restores in himself, here and now, the state of Adam who did not eat meat before his fall into sin, and gains a foretaste of the manner of the coming life—where, according to St. Theodore the Studite, the chosen will no longer be in submission to the needs of the flesh.

Fasting Is the Restoration of Nature

Fasting is “violence exerted over nature”, but a violence necessary in order for reason to regain its sovereignty over the belly and unreasoning part of the soul. While food generates passions, fasting is the “mother of the virtues” and all good deeds. It is the “royal path of purification”, the guardian of purity, and “mother of passionlessness”. It is like a sword that cuts all evil away from the heart; it humbles the passions like the lions that Daniel tamed thanks to his temperance. Casting away the demons, it helps us flee the fire of Gehenna, grants us the angels’ intercessions, and enlivens our souls deadened by passions. “Fasting is the mother of purity, the condemnation of sin, the preaching of repentance, the life of the angels, and the salvation of men.” During the Forty Days, fasting submits the flesh to the activity of the soul: “The servant girl no longer gives orders to the queen but has finally returned to her proper place.” This restoration of harmony in the human system has social and even cosmic results, which the holy fathers knew how to cultivate. Fasting, they affirm, brings balance into the family—thanks to it the young and old each remain in their own place and cultivate their own virtues. Thanks to it the nation is preserved in good order, and the city is in peace. Thanks to the restrained relationship of a person—a true microcosm—to the entire tangible world, the center of which is man, the air itself becomes as if purer during Great Lent. And the universe also naturally aids in man’s purification.

Fasting of course remains the main and even irreplaceable support of repentance. Without fasting—that is, without the body’s participation in the soul’s effort to convert and return to its original state, which it applies during the course of forty days—repentance (metanoia) would remain in vain. “Fasting,” says St. Basil the Great, “is the beginning of repentance.” Incidentally, in the hymnological catechism of the Triodion, troparia exclusively praising fasting are rare; more often they are associated with metanoia or with the totality of the virtues that are cultivated during the Lenten period. “Be sober, be vigilant, sigh, weep with fasting; cast off the burden of sin O my soul, so that you might through fervent repentance be delivered from the fire, and by weeping over your sins you might rend the garment of mourning, receiving a divine garment.”