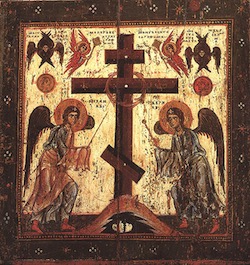 THIRD SUNDAY OF LENT: VENERATION OF THE CROSS — Tone 7. Veneration of the Cross. Martyr Matrona of Thessalonica (3rd-4th c.).

By Your Cross You destroyed death. To the thief You opened Paradise. For the Myrrhbearers You changed weeping into joy. And You commanded Your disciples, O Christ God, to proclaim that You are risen,// granting the world great mercy.

Tone 1 Troparion (of the Cross)

O Lord, save Your people, and bless Your inheritance! Grant victories to the Orthodox Christians over their adversaries; and by virtue of Your Cross,// preserve Your habitation!

Tone 7 Kontakion (of the Cross)

Now the flaming sword no longer guards the gates of Eden; it has been mysteriously quenched by the wood of the Cross. The sting of death and the victory of hell have been vanquished; for You, O my Savior, have come and cried to those in hell:// “Enter again into Paradise!”

Tone 6 Prokeimenon (of the Cross)

Seeing then that we have a great High Priest who has passed through the heavens, Jesus the Son of God, let us hold fast our confession. For we do not have a High Priest who cannot sympathize with our weaknesses, but was in all points tempted as we are, yet without sin. Let us therefore come boldly to the throne of grace, that we may obtain mercy and find grace to help in time of need. For every high priest taken from among men is appointed for men in things pertaining to God, that he may offer both gifts and sacrifices for sins. He can have compassion on those who are ignorant and going astray, since he himself is also subject to weakness. Because of this he is required as for the people, so also for himself, to offer sacrifices for sins. And no man takes this honor to himself, but he who is called by God, just as Aaron was. So also Christ did not glorify Himself to become High Priest, but it was He who said to Him: “You are My Son, today I have begotten You.” As He also says in another place: “You are a priest forever according to the order of Melchizedek.”

When He had called the people to Himself, with His disciples also, He said to them, “Whoever desires to come after Me, let him deny himself, and take up his cross, and follow Me. For whoever desires to save his life will lose it, but whoever loses his life for My sake and the gospel’s will save it. For what will it profit a man if he gains the whole world, and loses his own soul? Or what will a man give in exchange for his soul? For whoever is ashamed of Me and My words in this adulterous and sinful generation, of him the Son of Man also will be ashamed when He comes in the glory of His Father with the holy angels.” And He said to them, “Assuredly, I say to you that there are some standing here who will not taste death till they see the kingdom of God present with power.”

3rd Sunday of Great Lent: Veneration of the Cross

The Third Sunday of Lent is that of the Veneration of the Cross. The cross stands in the midst of the church in the middle of the lenten season not merely to remind men of Christ’s redemption and to keep before them the goal of their efforts, but also to be venerated as that reality by which man must live to be saved. “He who does not take up his cross and follow me is not worthy of me” (Mt.10:38). For in the Cross of Christ Crucified lies both “the power of God and the wisdom of God” for those being saved (1 Cor.1:24).

In the long history of the Orthodox Church a definite style of church architecture has developed. This style is characterized by the attempt to reveal the fundamental experience of Orthodox Christianity: God is with us.

The fact that Christ the Immanuel (which translated means “God with us”) has come, determines the form of the Orthodox church building. God is with man in Christ through the Holy Spirit. The dwelling place of God is with man. “The Most High does not dwell in houses made with hands,” says Saint Stephen quoting the Old Testament prophets. Saint Paul says that men are the temples of God:

“Christ Jesus himself [is] the cornerstone, in Whom the whole structure is joined together and grows into a holy temple in the Lord; in Whom you also are built into it for a dwelling place of God in the Spirit” (Eph 2.21–22).

The words of Saint Peter are very much the same.

“Come to him [Christ] to that living stone . . . and like living stones be yourselves built into a spiritual house . . . to offer spiritual sacrifices acceptable to God through Jesus Christ” (1 Pet 2.4–5).

“We are the temple of the living God . . .” (2 Cor 6.16). And it is exactly this conviction and experience that Orthodox Church architecture wishes to convey.

Orthodox Church architecture reveals that God is with men, dwelling in them and living in them through Christ and the Spirit. It does so by using the dome or the vaulted ceiling to crown the Christian church building, the house of the Church which is the People of God. Unlike the pointed arches which point to God far up in the heavens, the dome or the spacious all-embracing ceiling gives the impression that in the Kingdom of God, and in the Church, Christ “unites all things in himself, things in heaven and things on earth,” (Eph 1.10) and that in Him we are all “filled with all the fullness of God” (Eph 3.19).

The interior of the Orthodox Church building is particularly styled to give the experience of the unity of all things in God. It is not constructed to reproduce the upper room of the Last Supper, nor to be simply a meeting hall for men whose life exists solely within the bounds of this earth. The church building is patterned after the image of God’s Kingdom in the Book of Revelation. Before us is the altar table on which Christ is enthroned, both as the Word of God in the Gospels and as the Lamb of God in the eucharistic sacrifice. Around the table are the angels and saints, the servants of the Word and the Lamb who glorify him—and through him, God the Father—in the perpetual adoration inspired by the Holy Spirit. The faithful Christians on earth who already belong to that holy assembly “. . . fellow citizens with the saints and members of the household of God . . .” (Eph 2.19) enter into the eternal worship of God’s Kingdom in the Church. Thus, in Orthodox practice the vestibule symbolizes this world. The nave is the place of the Church understood as the assembly and people of God. The altar area, called the sanctuary or the holy place, stands for the Kingdom of God.

On the Omnipotent Word of God

For with God nothing shall be impossible (Luke 1:37). Then God said, Let there be light, and there was light (Genesis 1:3). Until God spoke, there was no light. Nor was there anyone who could know what light was until God spoke and light came into being. In the same manner, when God spoke, water and the dry land, the firmament of the heavens, vegetation, animals and finally man came into existence. Until God spoke, none of this existed, and except for God no one could know that all of this could exist. By the power of His Word, God created all that is created on earth and in the heavens. Whatever God wanted to exist and called into being, that had to be and could not but have been, for the Word of God is irresistible and creative. The creation of the world is a great miracle accomplished by the Word of God. Having created all things, God again, by His Word, established the order of creation and the manner of behavior and relationship of creatures one with another. This order and manner which God established is a great miracle accomplished by God’s Word. There exists an order and manner among created things that is visible and comprehensible for us people; and there also exists an order and manner that is invisible and incomprehensible. According to that invisible and incomprehensible order and manner, which is a mystery hidden in the Holy Trinity, there have occurred and are occurring those manifestations that people call miracles. One such manifestation is the conception of the Lord Jesus Christ in the womb of the All-holy Virgin Mary, who had not known man. This appears like an interruption in the visible and comprehensible order and manner, but it is never an interruption for the invisible and incomprehensible order and manner. This birth is truly a great miracle; perhaps the greatest miracle that was ever revealed to us mortals. The entire created world is a miracle, and all the visible and comprehensible order and manner is a miracle, and altogether these miracles came about by the Word of God. Therefore, much in the same way, the Lord was conceived in the Virgin’s womb. All were brought about by the power and Word of God. That is why the wonderful Gabriel replied to the question of the All-pure one (a question asked by all generations: How shall this be? [Luke 1:34]): For with God nothing shall be impossible (Luke 1:37).

O Lord God, our Creator, Immortal and Ever-existing Miracle-worker, enlighten our minds that we no longer doubt, but believe; and direct our tongues not to question Thee, but to praise Thee. To Thee be glory and praise forever. Amen.

“There is no cleanness in him who thinks evil,” says St. Simeon the New Theologian; and he further adds: “How can there be a pure heart in one who soils it with impure thoughts as a mirror is darkened by dust?” Do you see, then, the inaccessible height at which Christianity stands above all other faiths and worldly sophistries? He who but thinks of evil, even though he does not commit any evil, is at fault before God and his own soul. For he offends God and loses his soul. To be a Christian, in the proper sense, means to invest an enormous effort on cleansing evil thoughts from one’s heart and mind. What kind of effort? There exists a vast amount of teaching about this—which in our days has become almost completely locked away, even from Christians—and an enormous wealth of actual experience on the part of holy men and women who justified that teaching. To cleanse oneself from wicked and impure thoughts, the root of all evil, was the goal of all the great ascetics, hermits and hesychasts.

“…in order to go beyond ideas about God, truth is revealed most fully by the Holy Spirit in and through worship, and especially in the Church’s celebration of the Holy Eucharist. The consensus of belief about the nature of the triune God has always arisen in and through the direct and personal experience of God – through prayer and worship – and not through academic study.”